The 2nd game of a short series of games I'm playing following the exploits of a Viking invasion of a small Anglian peninsular.

The Terrain
Rather difficult lighting at the time I took the photo, but the Anglo-Saxons will deploy on the left and the Vikings on the right. 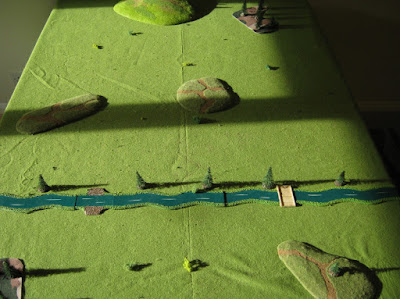 The Viking deployment put a mixed column of Huscarls and Warriors on this side of the river to attempt a flank attack. 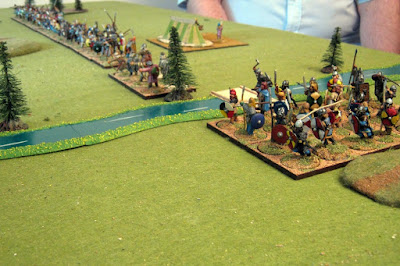 My plan for the Anglo-Saxons

The Anglo-Saxon deployment relied on the brute force of several units of Armoured Thegns to break through the centre of the Viking main line before the Viking flank attack could move down and manoeuvre over the river. Select Fyrd form the rear line and Camp defence. 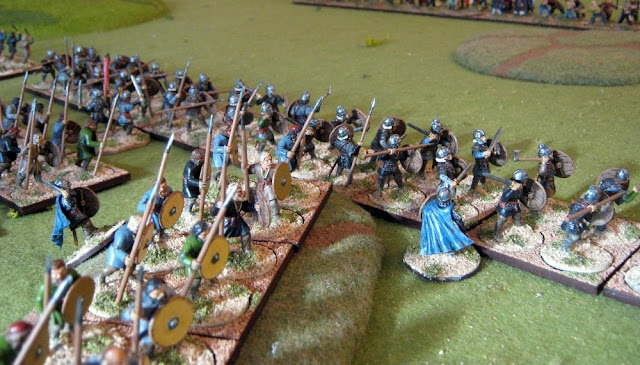 This picture better shows the Select Fyrd tasked with defending the camp against the flank attack. 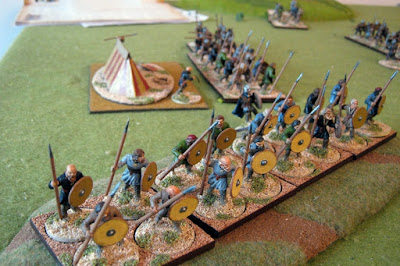 The front lines approach each other. The Viking flank attack moves down this side of the river. 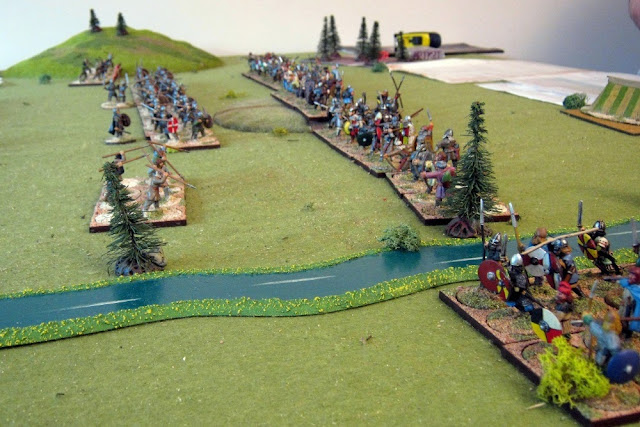 Two units of Vikings deserve mention here.
The bare-chested Viking Berserkers on the hill are about to charge in with Impact. They got a couple of hits with that and then managed to hold the Thegns for several turns.
The Viking Warrior shieldwall unit alongside them left of the hill also managed to hold off a sustained attack for several turns against another strong Thegn unit absorbing many of my best activation dice. This really slowed the Anglo-Saxon main attack. 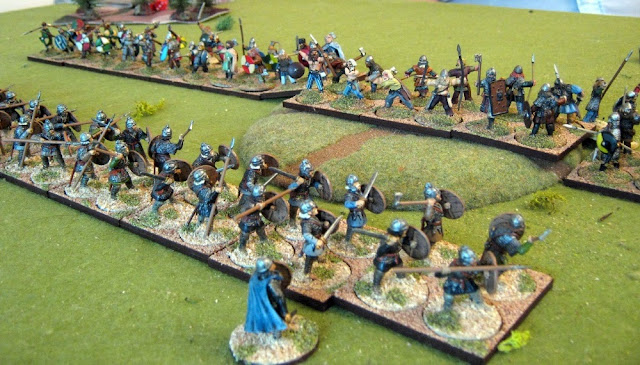 The Anglo-Saxon Thegns take the attack to the Vikings as planned, but held up by those Berserkers and that Warrior shieldwall the attack stalls. They should have broken by now. That was the plan wasn't it?
On the Anglo-Saxon right, the Viking flank attack has started to cross the river the Select Fyrd have to move up to them fend off the Thegns flank, rather than just sit and wait to defend the camp as planned. 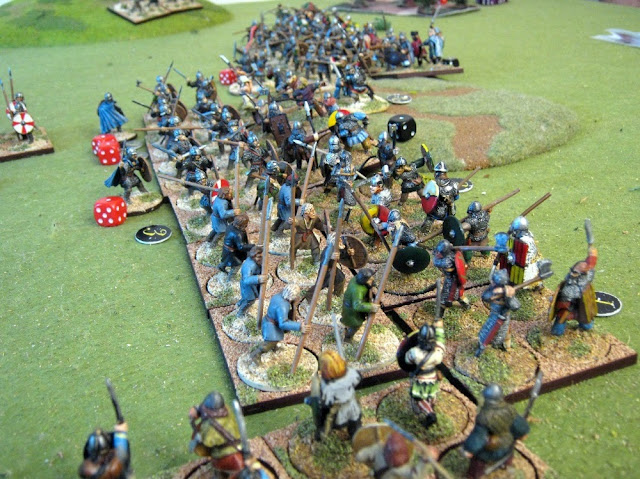 Luckily for the Select Fyrd, the Viking flank attack on the right has JUST failed to make contact .... 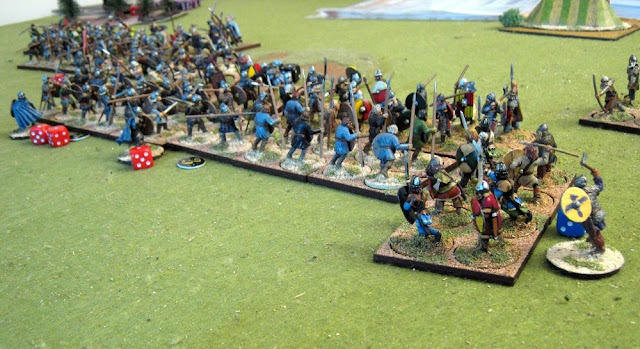 ...but more are crossing the ford. 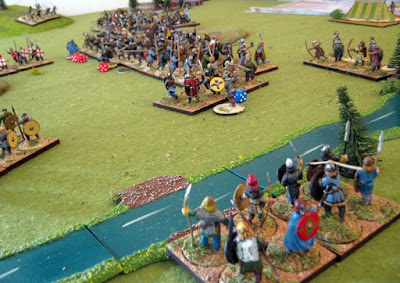 The Select Fyrd hold on for a while and get some support (just off camera to the left unfortunately).
And the Thegns finally start to break through the Viking centre ... 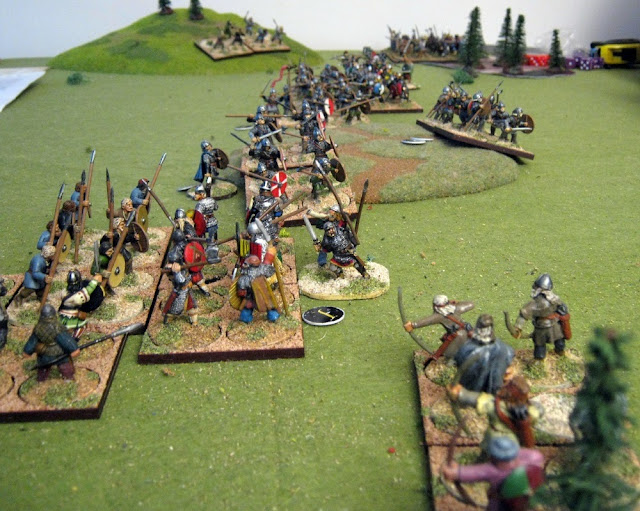 ... and they only have eyes for the prize - The Viking camp. 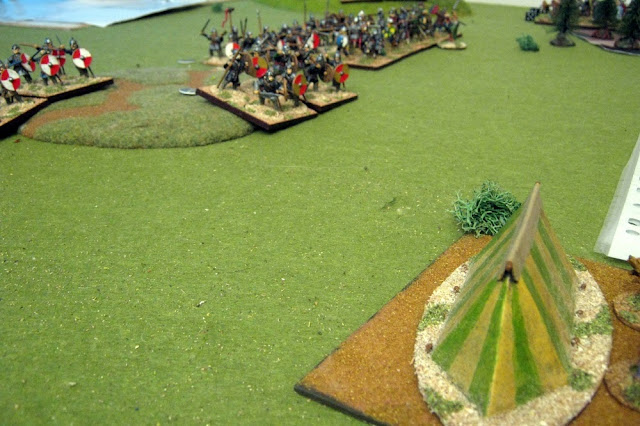 But back at base the Viking flank attack has managed to reach the Anglo-Saxon camp and takes it in one go ... 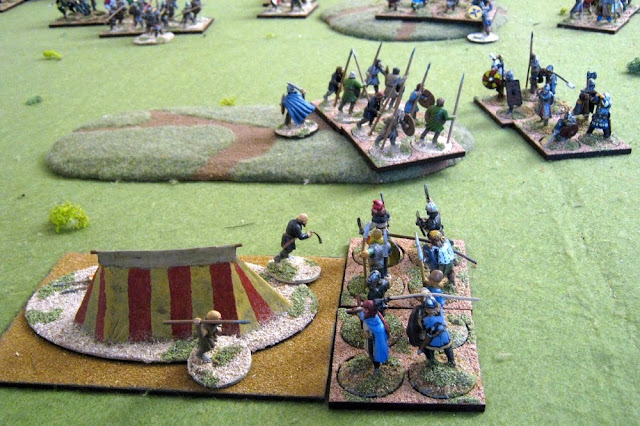 ... whereas the Thegns have failed miserably to hit the Viking camp effectively and get charged in the rear by some rag-tag skirmishers who give them the one hit they need to rout them. 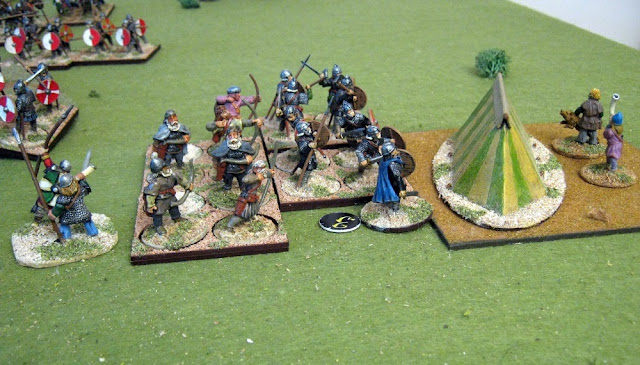 And to make matters worse, more Thegns focused on one unit of Viking Huscarls get hit in the flank by some Viking Warriors and finished off. 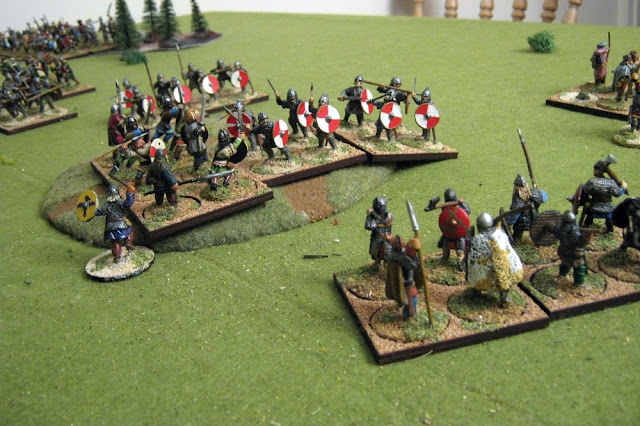 With two units and the camp lost in short order the Anglo-Saxons have thrown it away.

As usual there was plenty of off-camera action giving an exiting game.
Posted by Colin's Wargaming Stuff at 10:54