The action will take place from Saladin's last attempt to break of the Siege Of Acre, to the Battle Of Arsuf.

Games will be played using various rules depending on the scenario and, perhaps, what I fancy:
In some cases the result of battles fought will influence what happens next, especially if the outcome is not historical. In these cases it may result in another battle being fought where one side takes advantage of an opportunity.

Break Up The Column
25th-26th August, 1191
The Crusader army is advancing down the coast in three separate divisions. Saladin's son, al-Afdal, attempts to slow the Crusader's rearguard to separate them from the rest. If successful, Saladin's main force could exploit the gap between the Crusader rearguard and the rest of the army.

Skirmish Attacks on the Column
30th August, 1191
Saladin intended this to be a major assault, but it didn't develop that way.

Determined Attacks on the Column
2nd September, 1191
Another attempt to break the deadlock resulting in fierce fighting.

Battle Of Arsuf
7th September, 1191.
The climax of this set of scenarios with Saladin launching a major attack as the Crusaders approach Arsuf.

Rather than create a complete campaign I have decided to run this as a series of linked scenarios based on historical encounters. This is partly because the historical movements, of the Crusaders at least, were fairly linear along the coast. This means there is much scope for variation except timing and position of encampments and encounters. Also, as it is a solo effort, I would be making decisions for both sides while knowing the intention of the enemy. 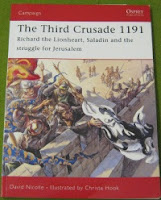 Posted by Colin's Wargaming Stuff at 18:10