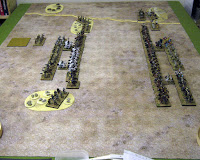 The city of Acre on the east coast of the Mediterranean had been under siege by the Crusaders since August 1189. The Crusaders had blockaded the city by sea and encircled it on land. In turn they were encircled inland by Egyptians who were trying to relieve the Siege of Acre. The situation came to a head with the arrival of King Richard in June 1191, whose plan was to take Acre and then secure the coast as they moved south towards Jerusalem. In the city, the garrison were on the verge of surrender and Saladin's encircling army made a last attempt too break the Siege of Acre. 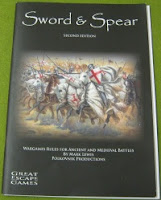 An excuse for a big bash to start things off in this series of games.
I used Sword & Spear (2nd Edition) rules by Mark Lewis, published by Great Escape Games.

I have used one unit is represented by 2 square bases, so 4 cavalry figs or 8 infantry figs to a unit.
The red and black dice indicate activations, The numbered discs represent hits. The yellow and blue dice (where shown) represent combat results. 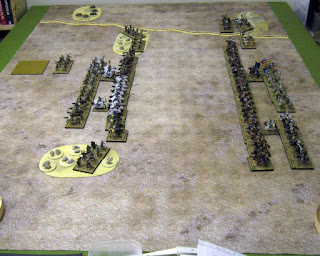 The initial layout,
Crusaders on the left. The City of Acre lies off-table behind the Crusaders.
The deployment was done using the Attack on a Prepared Position scenario but I varied the allowed Stratagems to better suit the situation.
Both sides are heavy on cavalry.
I made the assumption that the Saracens preceded their attack with harassing arrow fire and that the Crusader cavalry had already moved through the infantry to try to push away the attackers leaving the infantry as a back stop. 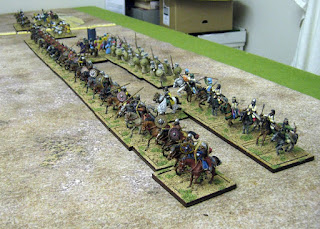 Cavalry at the front, mainly Ghilmen who are also bow armed. Light horse and Archers out to the flanks. Infantry in support in the centre. 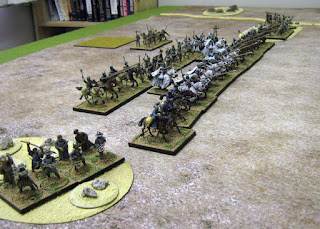 Cavalry and a single Turcopole unit at the front. Missile troops on the flank and mainly infantry behind in the centre.


Turn 1
Intitially there was a cautious general advance by both sides. Then the Crusader Templar Knights had the chance of a bonus move and were able to close the gap striking the Ghilmen before they had a chance to use their bows. This also gave them Impact, but in fact few casualties resulted.


Turn 3
Not much changed in the centre.
On the Crusader right, the Turcopoles have broken and been replaced by Spearmen while the Knights and Turcoman cavalry also make contact. The Turcoman Light horse nip nimbly round the Crossbowmen but fail to get any hits on them. 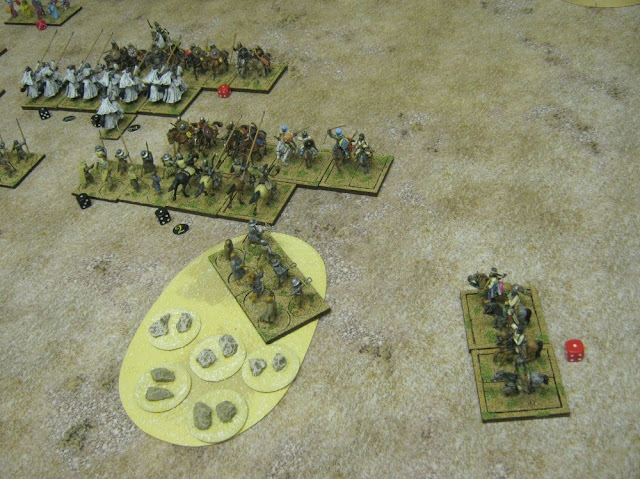 Turn 4 and it all kicks off

In the centre it all happened quite quickly.
First round of combats were resolved between the Egyptian Cavalry and the Crusader Knights.
At the same time the Templar Knights push against one unit of Ghilmen which does not have an activation dice so they don't get any Impetus.


Next phase of Turn 4 and the second unit of Ghilmen can attack the right hand Templars and more Ghilmen attack the Crusader Knights, who have support from their Spearmen.


Next phase, still Turn 4.
Turcoman Light horse manage to finish off the Crossbowmen in the Rough Ground on the right leaving the Crusader right flank rather exposed.

The position on the Crusader left. The skirmishing on the flank is still going on ineffectually and Crusader Infantry in the centre is being committed to support the Cavalry. 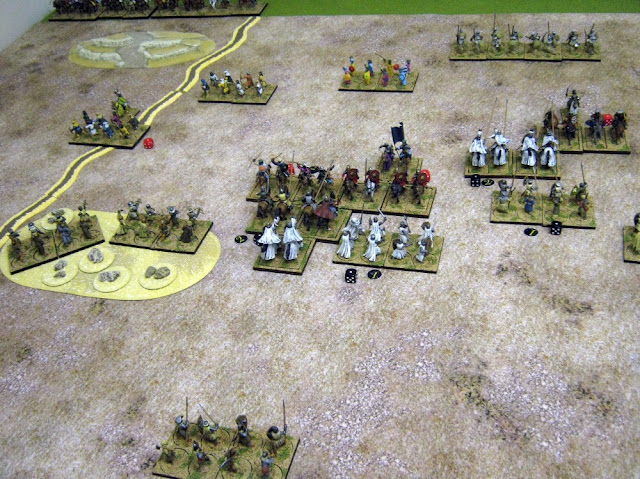 End of Turn 4 and having lost one third of Army Value, the Crusaders had to make an Army Morale test. Each unit rolls against it's discipline and gain a hit if failed. Only one unit failed.


Turn 5
The Egyptians break through on the Crusaders right.


Turn 6
First phase of turn 6 and the second Templar Knight unit breaks and the Army General is killed in the Pursuit. The Crusaders have no Commanders left.


On the left of centre, the Crusaders get a small victory and manage to kill one of the Egyptian Captains.


The Crusaders had reached their breakpoint and had no Commanders left. The Egyptians worthy winners and it was a lot of fun.

Historically an Egyptian breakthrough was made but the Crusaders managed to close the gap before it could be exploited. The garrison surrendered the next day.

I might have been better to ignore the empty flank set-up for the Attack on a Prepared Position scenario as effectively the Crusaders were encircling the city of Acre.

Posted by Colin's Wargaming Stuff at 15:22