The Crusader army is advancing south down the coast in three separate divisions. Saladin's son, al-Afdal, attempts to slow the Crusader's rearguard to separate them from the rest. If successful, Saladin's main force could exploit the gap between the Crusader rearguard and the rest of the army.

I used Lion Rampant rules by Daniel Mersey for this game.
It was based on the Scenario D: A Gentle Stroll.

The Crusaders are marching down the coast and only being attacked from one side so I adjusted the initial deployment to suit.
The Crusader Retinue must make it's way down from the North West (top left) of the table and move off in the South West (bottom left) corner. The deployment of the Egyptian Retinue had to be adjusted to suit so that some units came on in the South East corner as the original scenario, but the rest came on along the East side, with 24" of the North East corner. 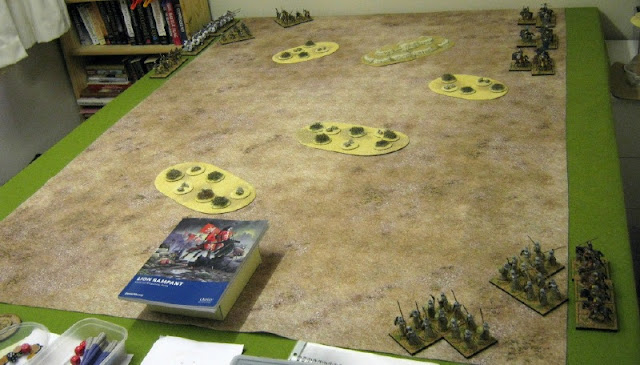 
The first moves.
While most of the Crusaders sped south down the coast, the Crusader Mounted Sergeants to moved east to counter the Egyptian mounted Yeomen. However the Yeomen left them behind and rode off to engage the Foot Sergeants making their way through some rough ground. 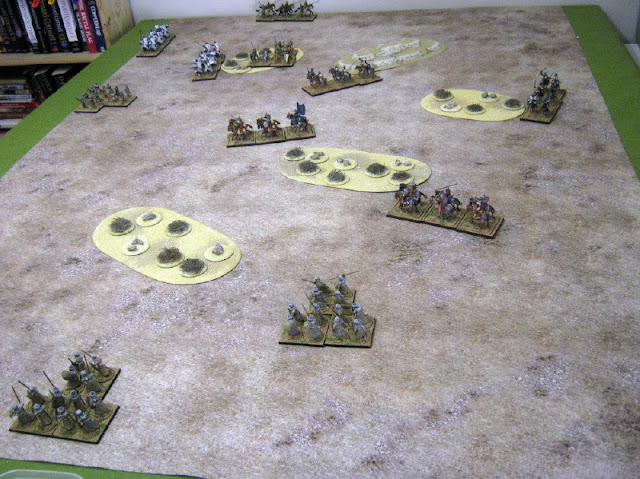 The Crusader Foot Sergeants tried to force their way through but they were under a hail of arrow fire from two units. 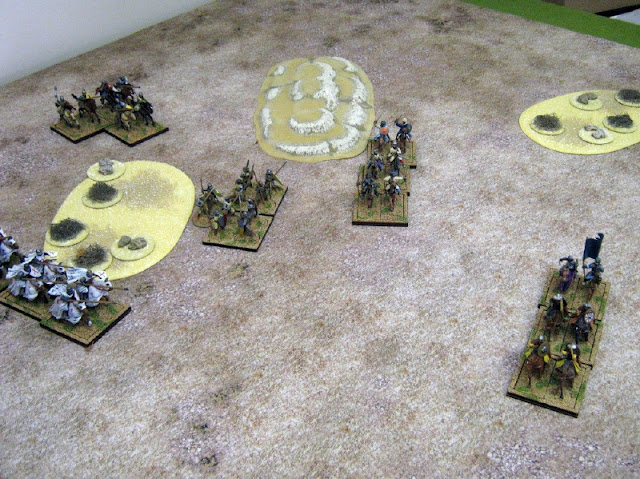 The two Crusader Men-at-Arms units pushed back the Mounted Yeomen and threatened a unit of Egyptian Mounted Sergeant unit.
But a surprise came when the Crusader Crossbowmen loosed a volley at the other Egyptian Mounted Sergeants causing 2 hits, followed by a failed Courage Test of double one, so they routed immediately.
I later realised that, in fact, the Egyptian Leader was within 12" so they should have been been battered not routed, but as it turned out it made little difference. 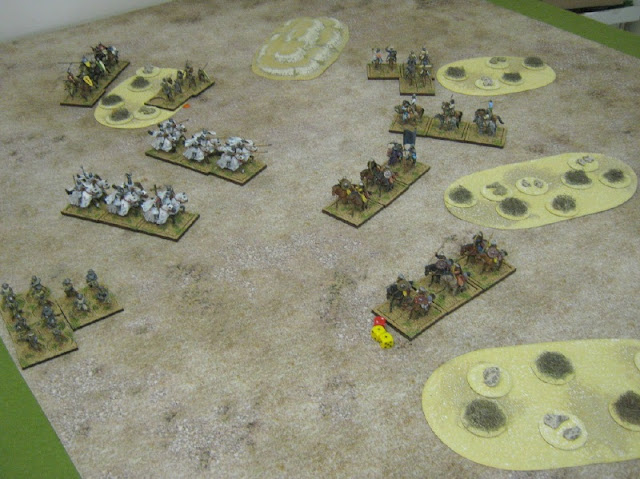 The poor Foot Sergeants by the rough ground were being whittled down and finally routed.
One unit of Mounted Yeomen got into rough ground causing the Crusader Men-at-Arms to wild charge at a disadvantage. The outcome was 2 casualties each with the Men-at-Arms withdrawing to lick their pride. 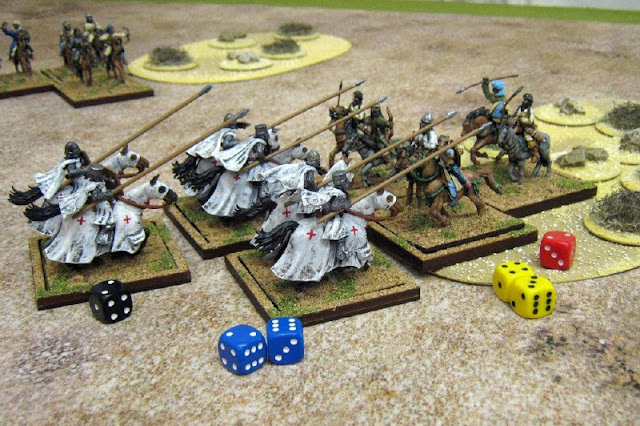 An overview shows that the Crusader Men-at-Arms are holding off the Egyptian cavalry, at some cost to themselves, while the Crossbowmen and Mounted Sergeants try to move south. The Egyptian Yeomen are trying to cut off the escape, but are still some way short and ideally will form Schiltron when they get into position. 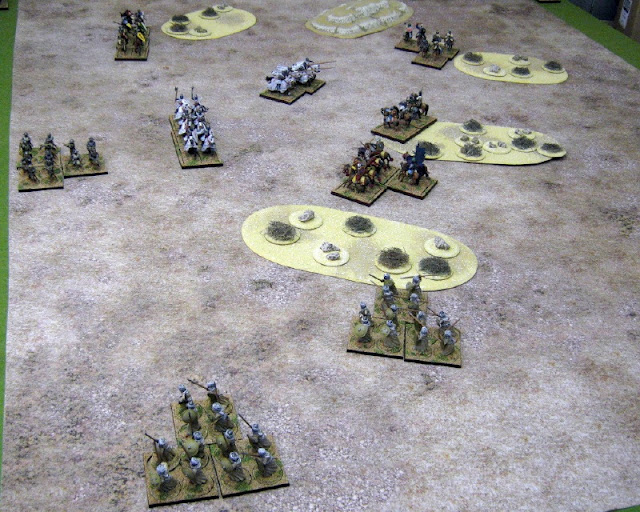 Another wild charge was forced on the Men-at-Arms causing more casualties and another low Courage Test throw caused them to rout. 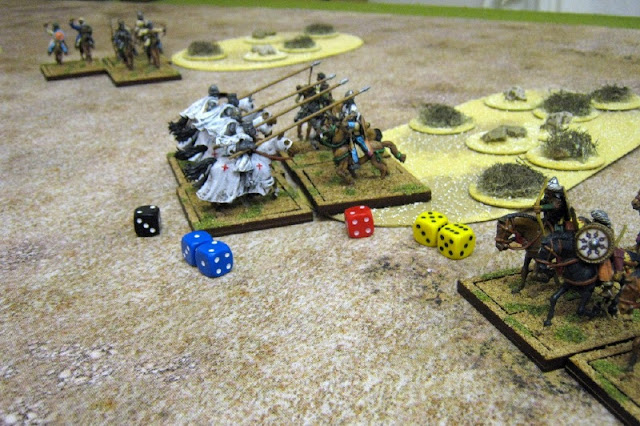 This was followed by another disaster, this time for the Egyptians again. The Crusader Leader's Men-at-Arms unit charged the Egyptian Leader's Mounted Sergeants causing 3 casualties. Another double one Courage Test meant the Egyptian unit routed, with the Leader. 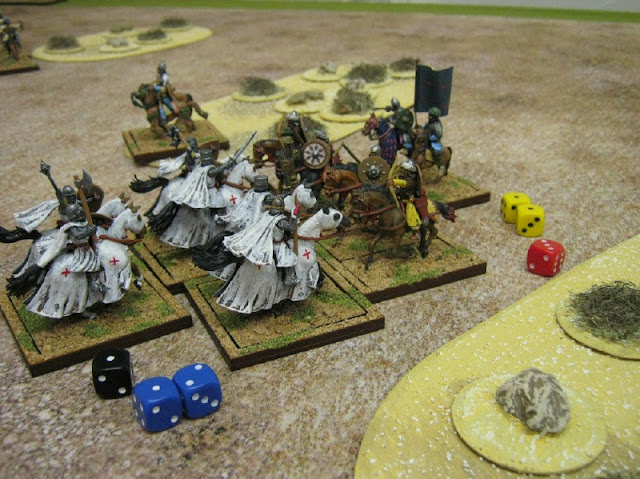 This also resulted in one Foot Yeomen unit and the depleted Mounted Yeomen becoming battered.
This scenario being what it is, however and the Egyptians carried on. 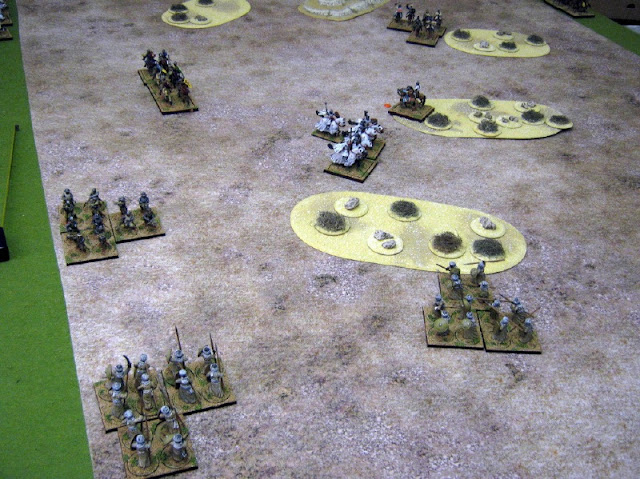 Next the Crusader Men-at-Arms finished off the Mounted Yeomen in the rough ground. 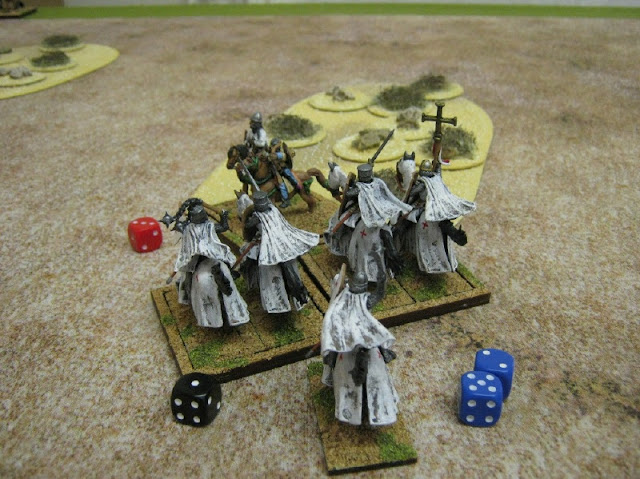 ... and the Crossbowmen started to kill the stationary Foot Yeomen. 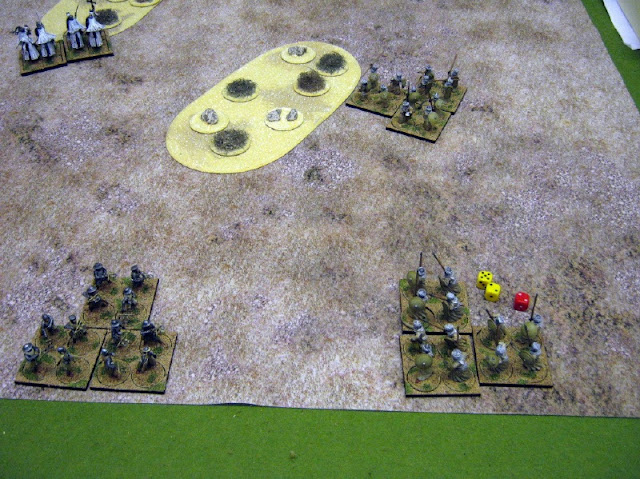 The Crusader Men-at-Arms fail to wild charge the Mounted Yeomen and the Mounted Sergeants go in but do not destroy them. 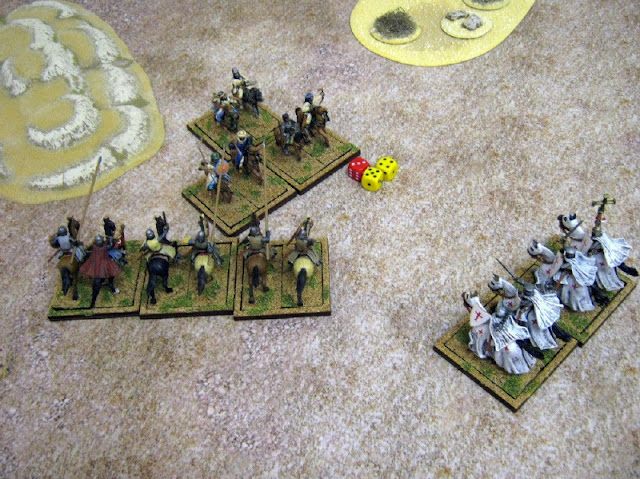 For their trouble, the mounted Sergeants take a couple of casualties (yes, 6 x 5,6s). 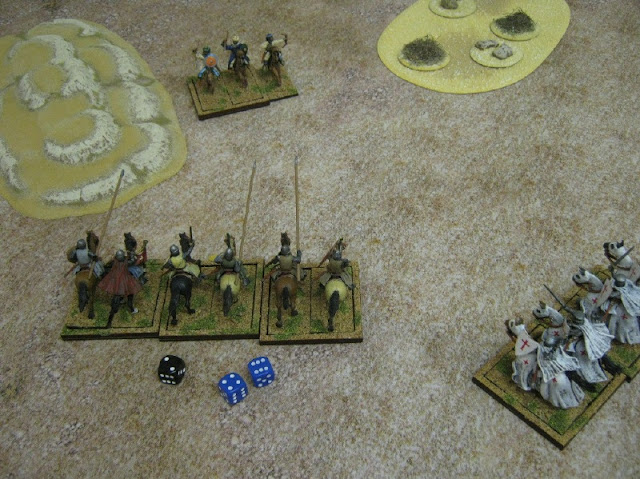 As the Men-at-Arms are now out of wild charge range, both they and the mounted Sergeants make a bolt for the corner of the table. 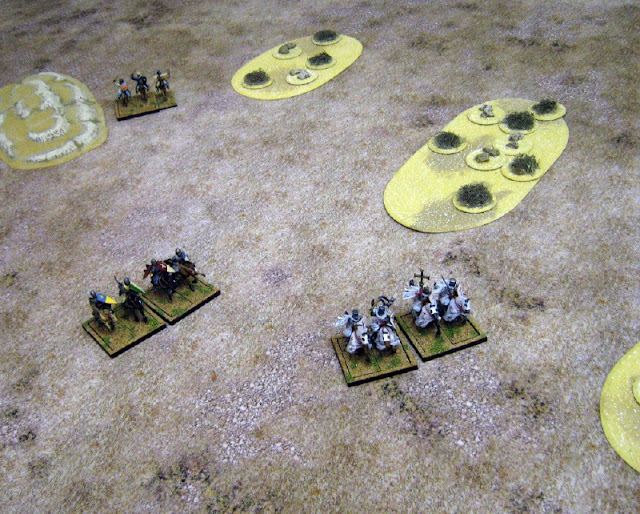 ... where the Crossbowmen are holding off two units of foot Yeomen. 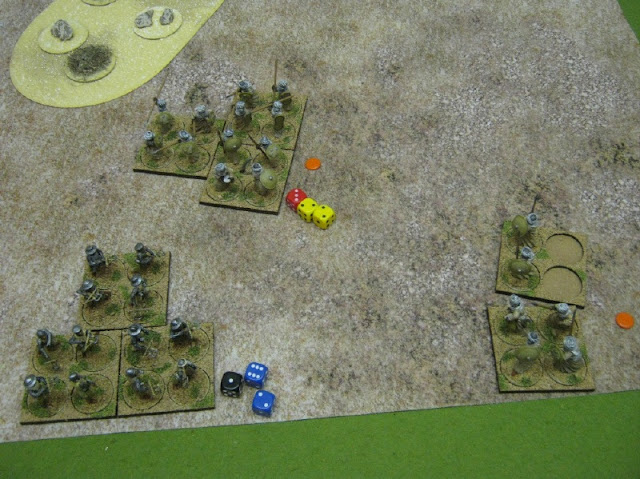 But it's not over yet.
The reduced mounted Yeomen give chase and fire at the Men-at-Arms that failed to move last turn.
They cause one casualty.
Another double one - That casualty is the Leader, causing Courage Tests. 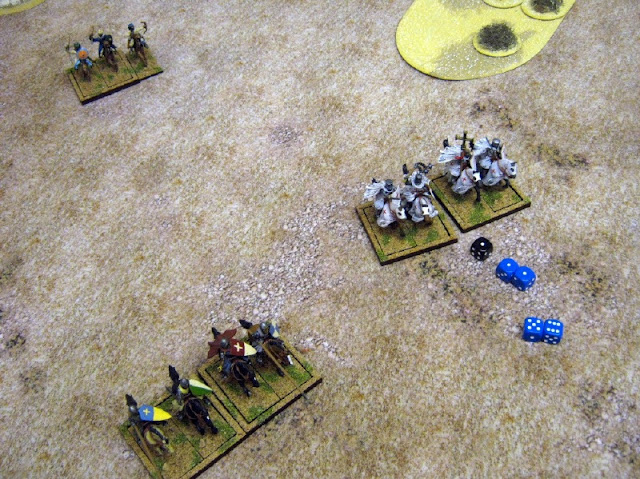 ... and to cap things off, another double one and the mounted Sergeants rout meaning the Crusaders only have two units on the table and can't win. 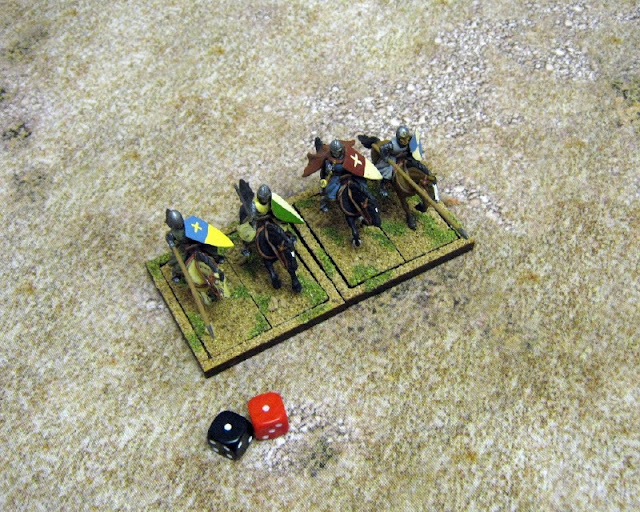 Incredible (if I wasn't there) - four double ones at critical stages, and plenty of other low scores mixed in.
Well the game balanced out, and was entertaining, if frustrating at times, to play. I was in two minds whether to publish this, but these things happen and it's only a game.

Historically, the Egyptians did manage to separate the Crusader's rearguard from the rest, but yet again the force that was supposed to exploit the gap had been committed elsewhere.
The Crusaders plodded on south for the next encounter.
Posted by Colin's Wargaming Stuff at 15:02