Scenario 6 of the series, Fighting the Great Patriotic War one battle at a time, written by Andrew Rolph and published by Miniature Wargames with Battlegames.
Rules used are Blitzkrieg Commander II by Specialist Military Publishing.
Most figures and models are Pendraken.
Background
It’s May 1943 on the Eastern Front and both Hitler and Stalin wanted to continue offensives around Kursk. Stalin had been persuaded to absorb the initial German attacks and use the rebuilt Tank and Mechanised Corps in counter-attacks once the Germans had been ground to a halt against the Soviet defences.
In this battle, the Germans are trying to straighten out the front line by penetrating a small salient.

The Soviets are defending from the east (far end) and can deploy up to 2/3 across the table - I.E. up to a line just beyond the small hill this side of the farm.
The Germans are attacking from the west (this end).


Deployment
The Germans are attacking from the west (this end). One battalion may use a flank attack up to half way along the north or south side.
I deployed the three Soviet battalions defending the farm area, the wooded area and hill alongside, with the third further back covering breakthroughs.

The Game
The Germans throw the might of their Panzer battalion against the defenses on the hill to the south (right of the picture below). The 2nd battalion GD Grenadier Regt move alongside in support.
The two Fusilier battalions move up to threaten the farm.


Although the Germans know the area is well defended, the Soviets are dug-in and haven't fired yet so the Germans cannot see their actual positions until they get really close. As soon as they catch sight of the enemy, the panzer battalion commander decides it would be a good idea to dash towards the Soviet defences immediately. These BKC Blunders do mix things up a bit sometimes. 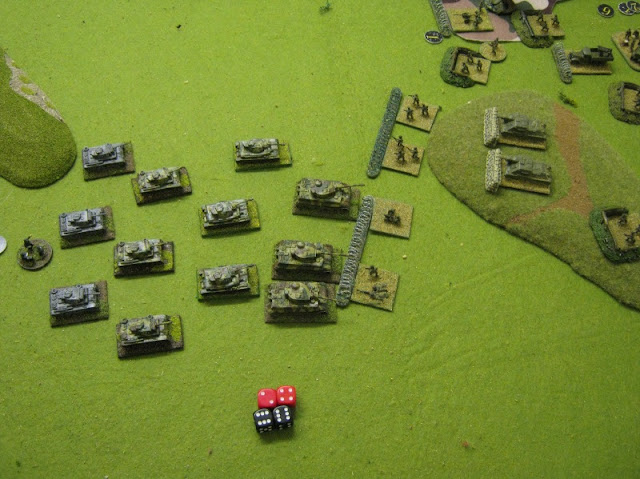 With plenty of support in good order, the well prepared infantry push back the rushed assault. 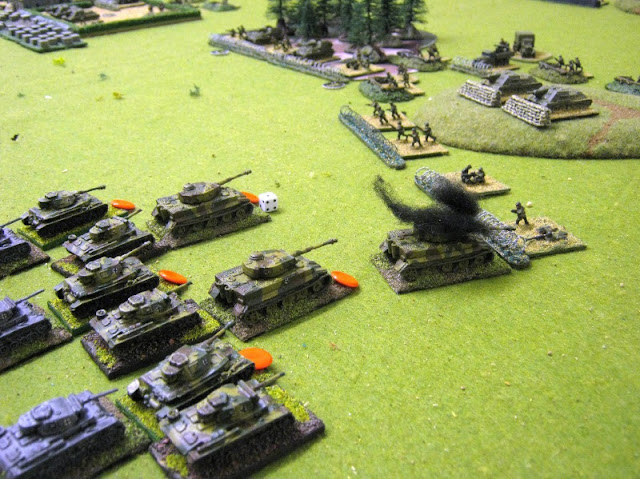 Now the Russians around the hill have opened fire they can be seen and the German FAOs on the hills can call in artillery. However the panzers are taking more effective fire than they can inflict against the dug-in Soviets, so they get ready to make another assault. 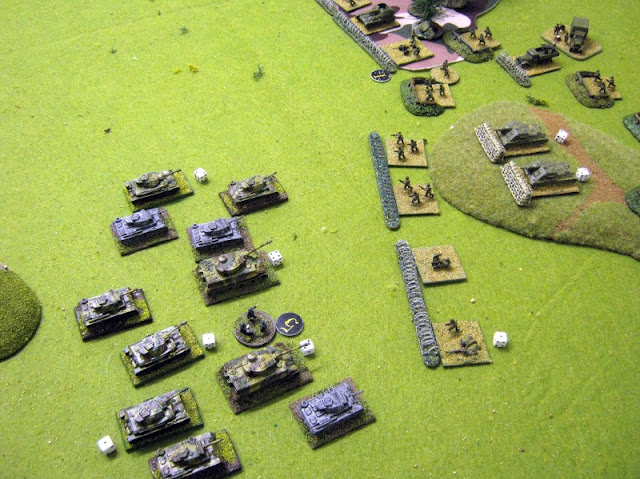 This time it is better prepared ... 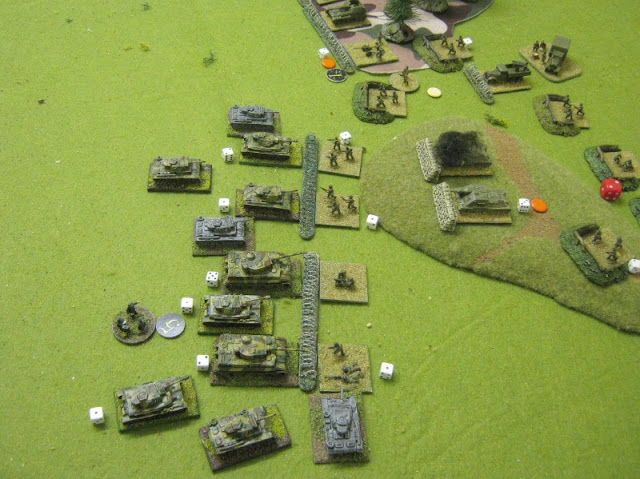 ... and most of the Soviet first line is pushed back. 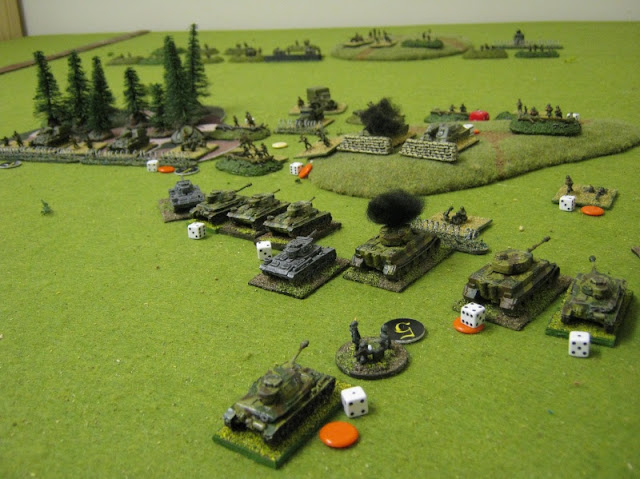 The panzers now use their firepower to finish off some of the defenders around the hill. 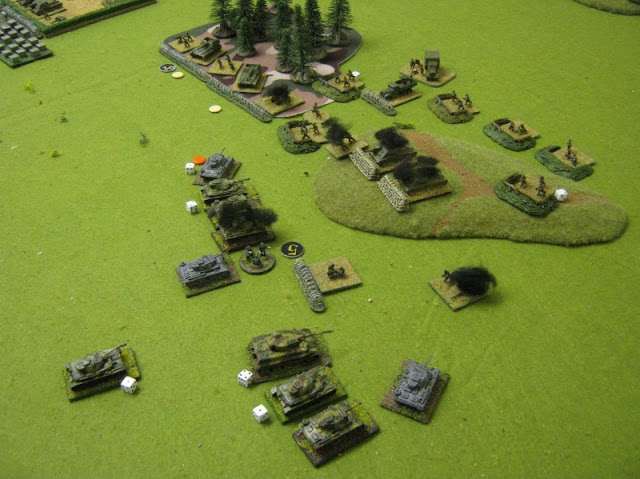 A stubborn Soviet machine gun position is outflanked and assaulted, forcing the remaining crew to abandon the position and are machine gunned downed. 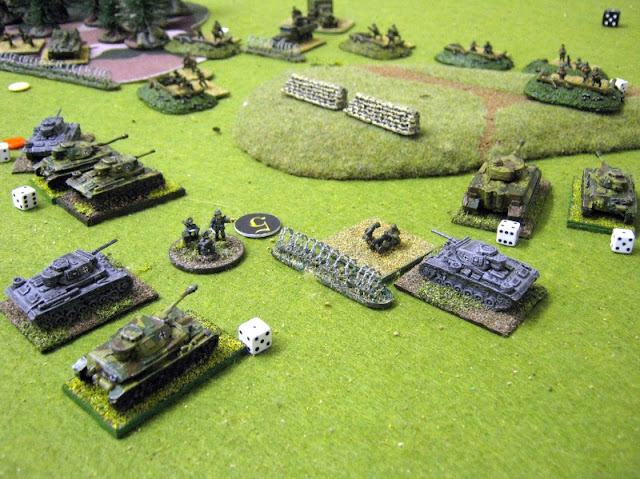 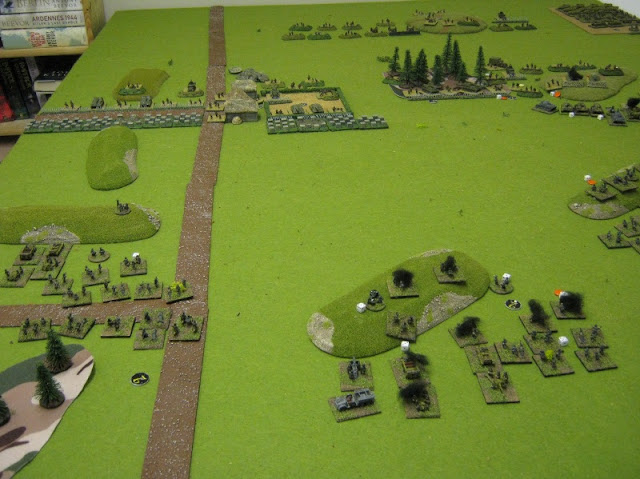 The flank attack by the 1st battalion GD Grenadier Regt comes in from the north. 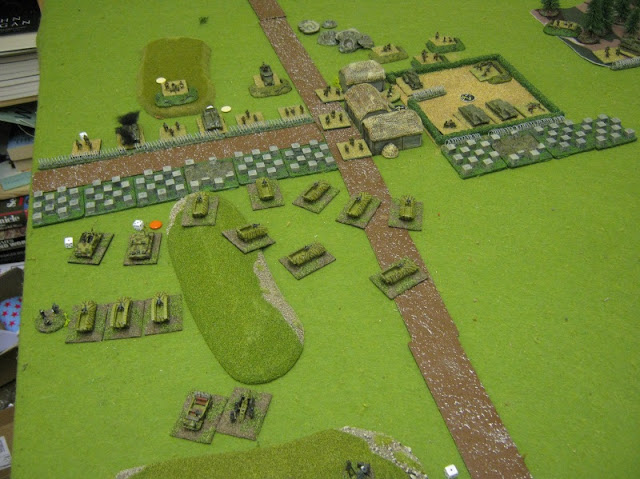 They quickly disembark to try to engage the inferior Russian infantry. 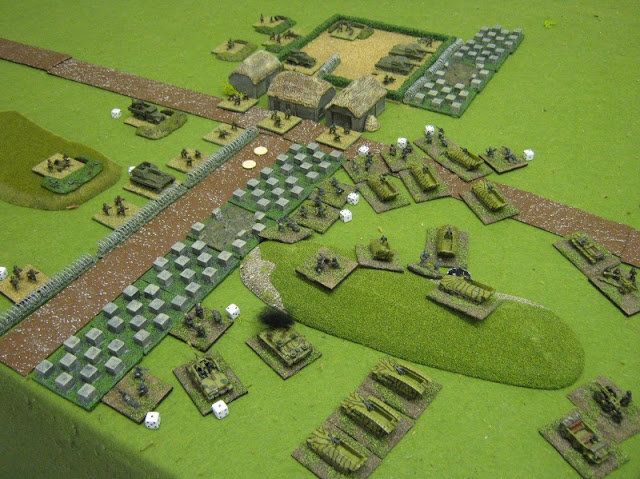 The Soviets prove themselves not to be so inferior after all. The flanking Grenadiers take several casualties while the Fusiliers (in the foreground) move up behind them. 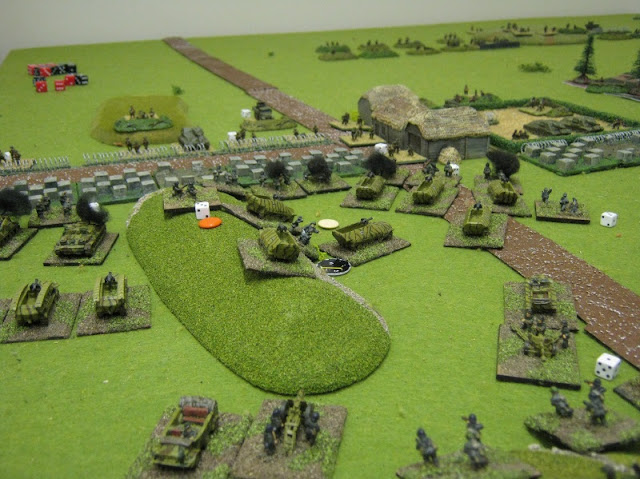 With most of their Grenadiers destroyed or running, the half-tracks fall back but at least form a screen for the slow moving Fusiliers behind. 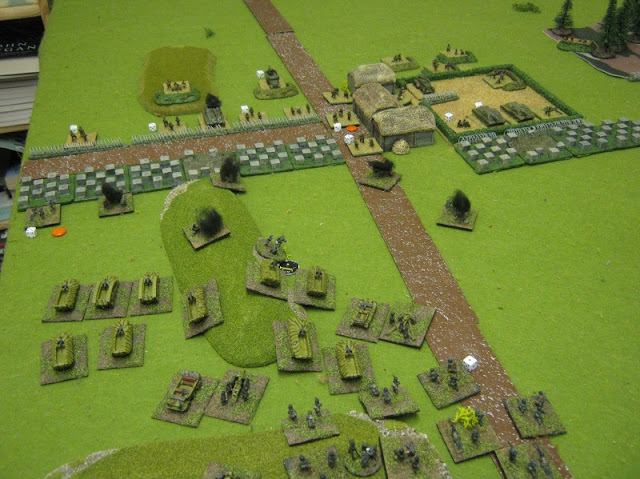 At the hill and wooded area the panzers are getting some support from the infantry behind them, as well as artillery fire being carefully placed by the FAOs. 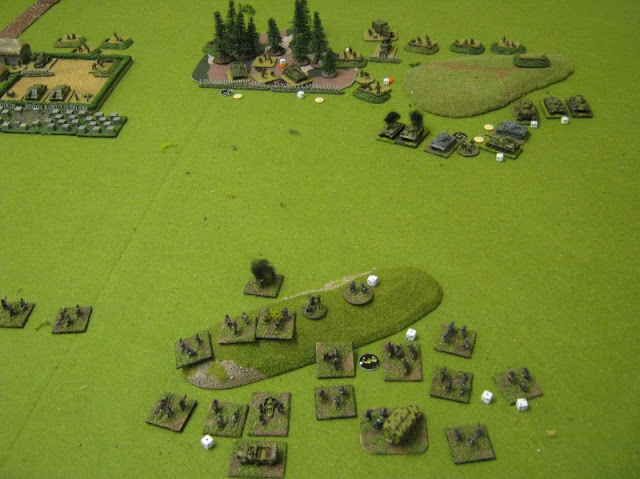 The panzers push forwards on the hill to try to force the remaining Soviets defenders to rout. The Soviet resolve is strong though, and some of the guns in the next line of defence now have targets. 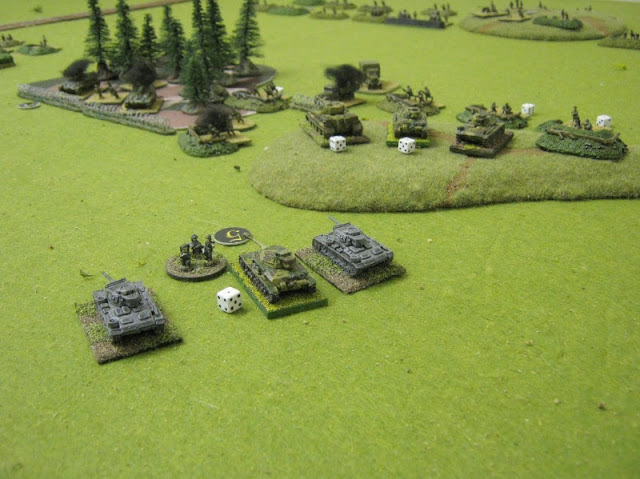 Now it's all or nothing for the Germans. All available forces in the south move up to engage the resilient Soviets in the woods and behind the hill. 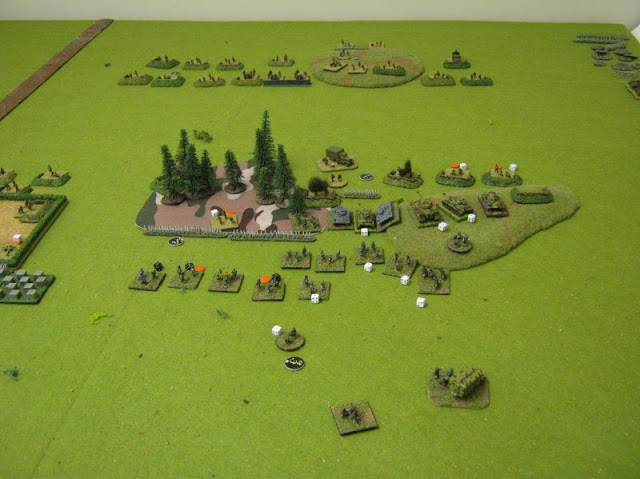 In the north, the Fusiliers have little option than to take on the farm ... 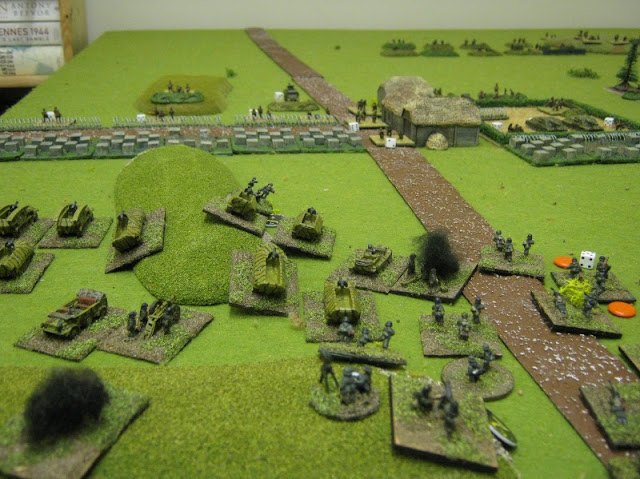 ...and what is left of the other Fusilier battalion moves up to do what they can. 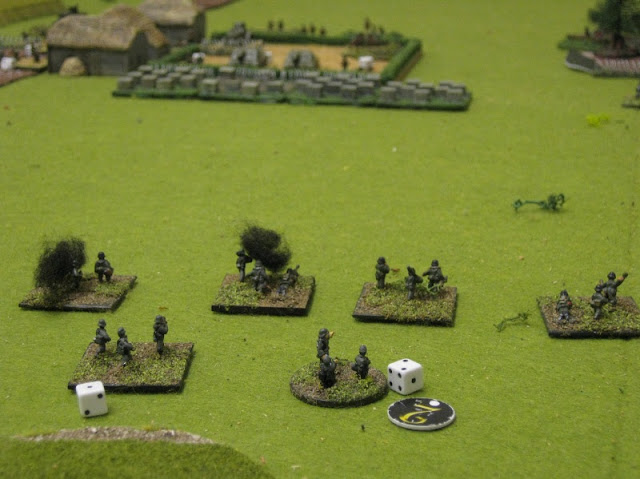 At the hill the remaining panzers have failed their morale test and pulled out of the battle (see note on formation morale below), while a handfull of Russians cling on on the woods. No doubt they will fail their morale throw next turn, but is too late for the Germans? 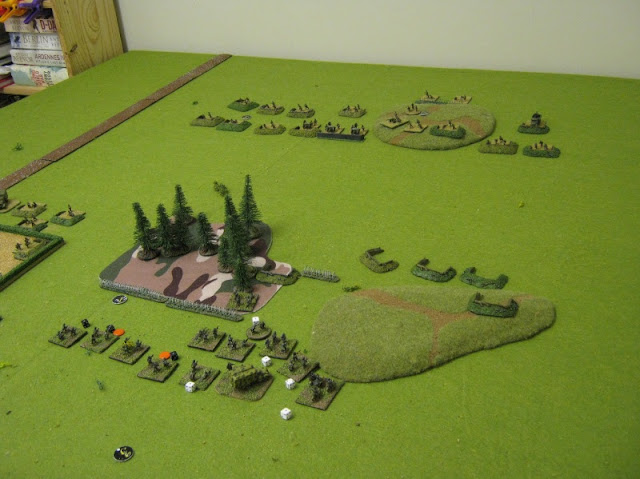 Yes it is too late.
The Grenadier half-tracks have legged it as have the Fusiliers in the centre.
With just the remains of one Grenadier battalion and one Fusilier battalion left on the table there is no way the Germans can win, even assuming the Soviets in the woods do rout. 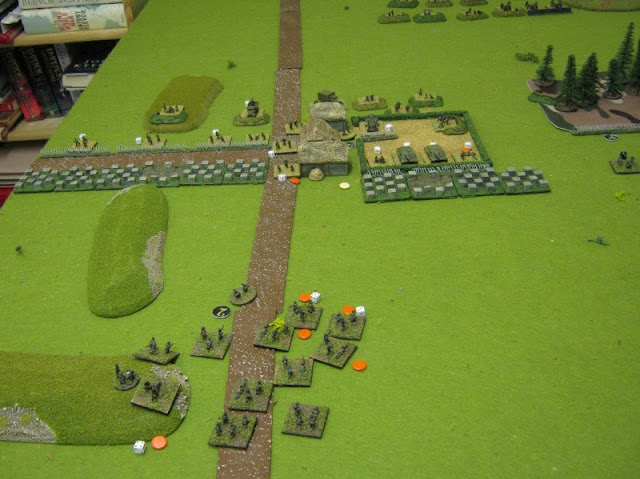 Formation Morale Checks.
A reminder, from previous reports in this series, that I have been checking morale for each formation (usually a battalion with supports or similar) rather then for the Battlegroup as a whole as in the BKC rules. It was a suggestion by Andrew Rolph in his articles that prompted me to try this and I like it. It does mean some extra effort before the battle working out the Breakpoint for each formation, and during the battle tracking casualties, but I think it's worth it.


Thoughts on this battle.
The German's better Command Values gave this attack a very good chance of success. The main fault had to be me sending in the flank attack to attack the farm instead of supporting the panzers. In my defence, when I made the plan I didn't think the supporting infantry the panzers did have would be so slow.
In any case, it was a great battle and left me wanting more.


Thoughts on the series of scenarios by Andrew Rolph.
I hope it comes across how much I enjoyed these games and following the progress on the Ostfront.
I was really happy to get my BKC stuff out after some hiatus and this series gave me that chance.
The lack of success by the Soviets in the attack is partly down to some of the differences in mechanics of the BKC II rules compared to Spearhead, but with a little effort this can be overcome. Also the compromises I had to make as playing it solo didn't help, but good fun nonetheless. Probably the main problem was my tactics.
Although I didn't manage to do a report for the battle in Part 4 - A Nasty Encounter, I did play it and had a good time.

There was mention of the possibility of more scenarios to follow. These have not appeared in Miniature Wargames under the new editor, so I was very pleased that the writer, Andrew Rolph, found my Blog and contacted me via the comments. He told me that there is another series of articles which are published by The Journal of Twentieth Century Wargamers.
See their website at http://sotcw.co.uk/shop and PDF Subscription 15 includes six new articles which I have bought and downloaded. Actually the 6th Journal in this series has not yet been published and will follow when it is ready.
I hope I will be able to start on these in the near future.
Posted by Colin's Wargaming Stuff at 15:15