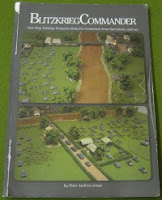 I'm going to take a short break from the Third Crusade games to have a bash at an old favourite, Blitzkrieg Commander II by Specialist Military Publishing.

Miniature Wargames (with Battlegames, as was at the time) has recently published a series of scenarios under the heading "Fighting the Great Patriotic War one battle at a time", written by Andrew Rolph. The scenarios are based on the WWII Ostfront between 1941 and 1943. I thought some of them might transfer well to BKCII and give me the push I needed to dust off the old rules. I'm looking forward to it.

Although the author of the scenarios has a particular set of rules in mind (I don't know what, let's call them Rules X) he gives lots of help to adapt the scenarios for other rules. After a read through of the first article it looks like firing ranges are far greater in BKCII than Rules X, and there is also a greater restriction on visibility in Rules X. For example in Rules X, unless firing, infantry in the open will only be seen within 9". I'll need to make allowances for that otherwise the Russian attackers (in the first scenario) will probably be mown down at long range. He also recommends using a morale mechanism for each unit* (usually about battalion strength) rather than an overall army breakpoint with some units* fighting to the last man. Something like that can be managed with BKCII.
* Note: I say "unit*" because in BKCII a Unit is just one stand. I will be using BKCII terminology in future.

The scenarios and further information are currently available for download from the Miniature Wargames website (confusingly under the name of Tabletop Gaming):
https://www.tabletopgaming.co.uk/historical-games/information/downloads/
The scenarios are under Issue 404
Further notes on play balance mechanisms are under Issue 400
Posted by Colin's Wargaming Stuff at 08:53