BKC II - To The Next River

Scenario 5 of the series, Fighting the Great Patriotic War one battle at a time, written by Andrew Rolph and published by Miniature Wargames with Battlegames.
Rules used are Blitzkrieg Commander II by Specialist Military Publishing.
Most figures and models are Pendraken.
Background
It’s early in 1943 on the Eastern Front and, in their counter-offensive, the Soviets are becoming adept at river crossings. They would try to end the current offensive with a bridgehead over the next river so the the next stage of the offensive would start from a bridgehead instead of with a river crossing.
The Germans learnt to counterattack immediately, with whatever they had to hand, to eliminate such bridgeheads. 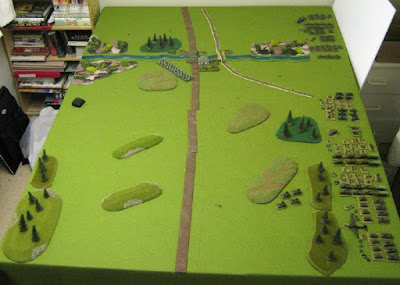 Layout
The initial layout. I used a table 6' x 4'.
The game is 14-16 turns long.
The river is fordable at the marshy areas.
The Germans are defending the river.
The Soviets are attacking from the east (this end).

Deployment
The Soviets are attacking from the east (this end).
The Germans are initially just defending the bridge with a Flak Battalion with reinforcements rushing in.
As I was playing solo I only rolled for the arrival position of the German reinforcements when they were due to turn up.

The Game
The Soviets start well with the 11th Tank Brigade with infantry support heading for the marshy area to the south of the bridge (left in this picture). The 59th Tank Brigade with infantry support head north to threaten the town and bridge, making use of the hills as cover.
The 99th m/c Btn head straight forwards to see if they can rush the bridge.

The 11th Tank Brigade get into the marshy area. 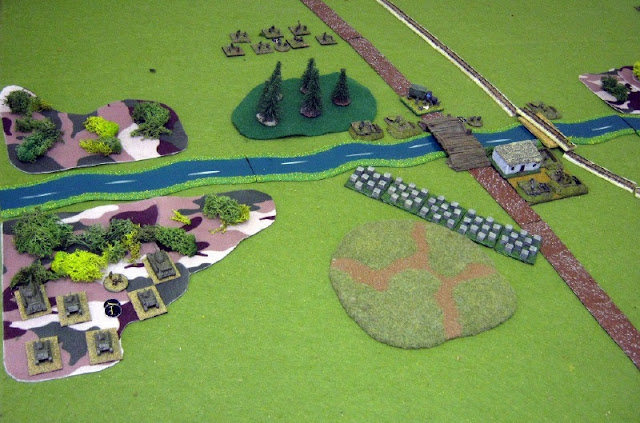 But the rest of the units get bogged down and start to cower behind the hills. 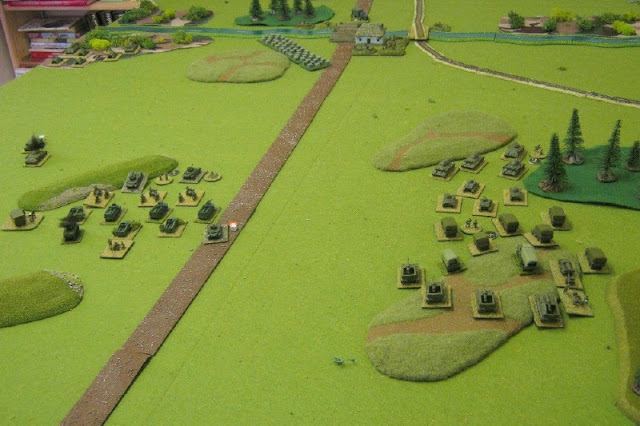 On a double one Command Roll the 11th Tank Brigade cross the river while the first German reinforcements close to the woods to support the bridge. 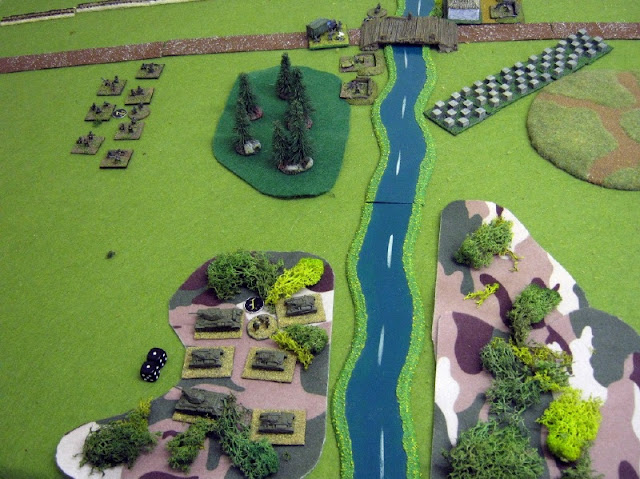 Then the Germans spring their trap. Luckily for them the rest of the reinforcements turn up on the Southern flank, with the 81st Sturm Battalion lurking in the marsh catching the 11th Tank Brigade in the flank. 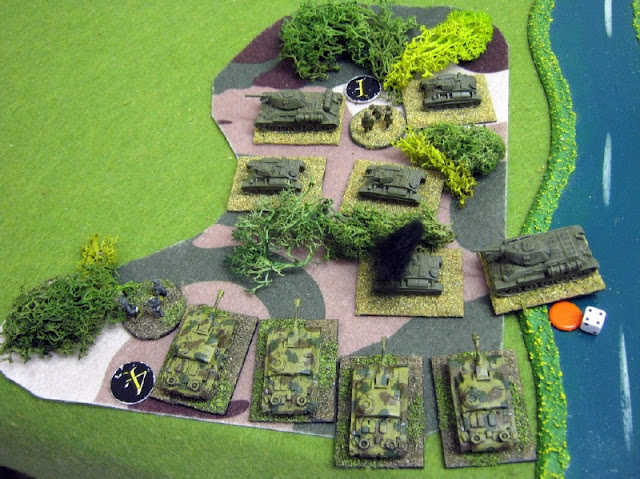 In addition, German infantry appear in the marsh behind them cutting them off from support. 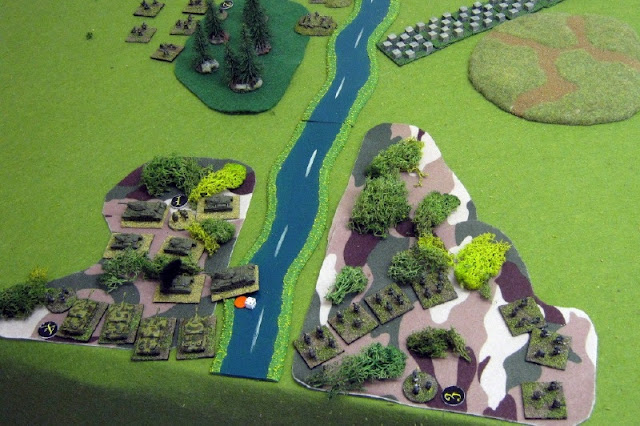 ... and in front of them more infantry with the 1/67th PzJaeger battlion. The 11th Tank Brigade breakthrough has been well and truly stopped. 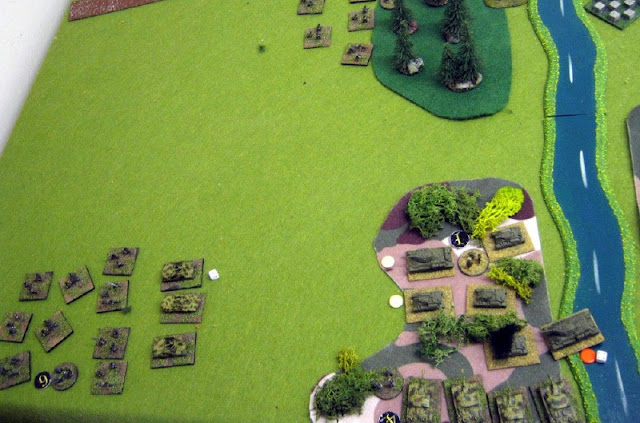 The Rifles of 11th Tank Brigade try to move into support but are held back by the Germans in the marsh. The motorcycle battalion is starting to get hit by the 88 in the town by the bridge. 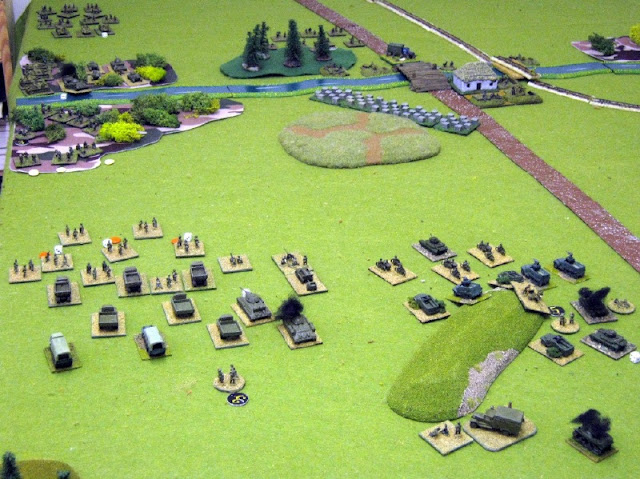 It's too late for the 11th Tank Brigade as the StuGs sweep through them. 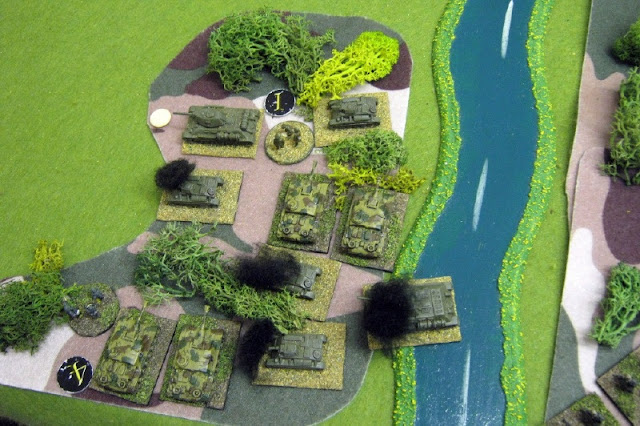 With the Soviet tanks in the marsh dealt with, the German infantry and StuGs can turn to face the remaining threat from the east. 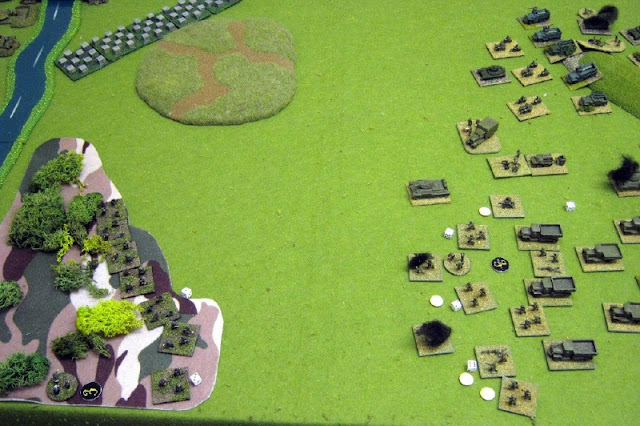 And the 88 turns its attention onto the 59th Tank Brigade which managed to move hardly at all while all this has been going on in the south. 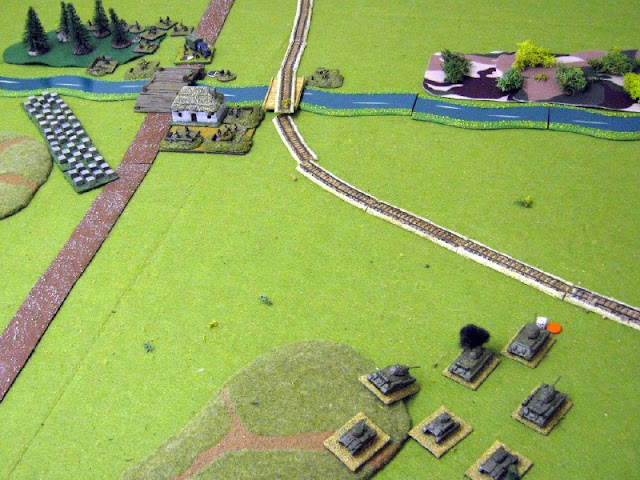 With additional support from the PzJaeger Battalion and infantry, the remaining Soviet threat in the north is held back. 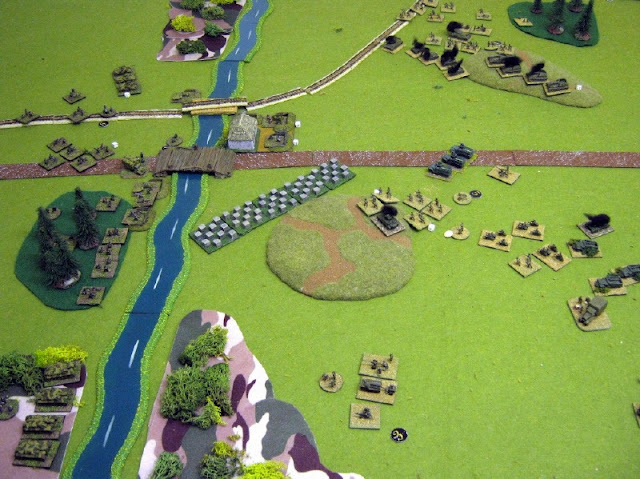 An overview at the end from the Soviet edge. The Soviets have very little armour left and can't get close enough to hit the German defences hard. 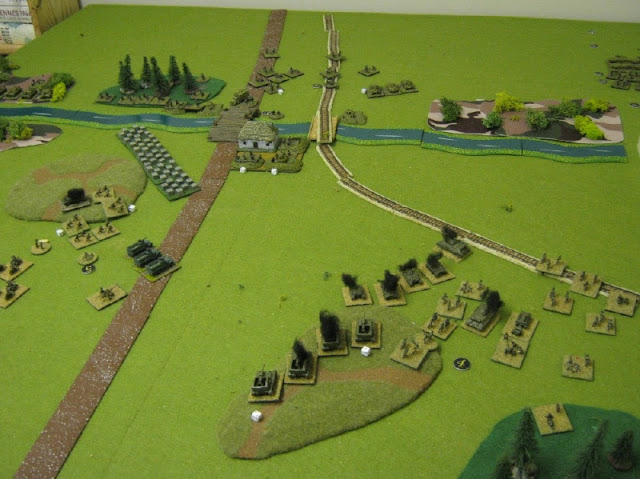 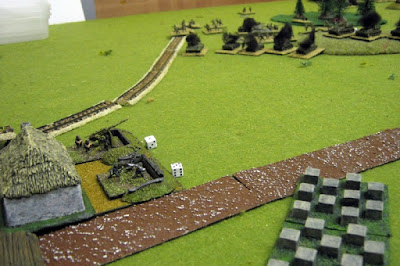 Final Comments
The 88 in the town did remarkably well considering they are usually the main target for any available fire. It held Soviet units back at long range and took very few hits long enough for the German reinforcements to arrive.

The Soviet 11th Tank Brigade very nearly made the breakthrough, but was unfortunately left unsupported and caught in an ambush that couldn't have been much better if it had been planned.

As I said earlier - I was playing solo so I only rolled for the arrival position of the German reinforcements when they were due to turn up. It was a total fluke they turned up on the southern flank, let alone the actual position on that flank.

The Stormovic failed to make any successful airstrikes due to failed command rolls or being driven off by AA fire.

It was an enjoyable and well balanced game with the Russians let down again by my poor command rolls for them, and the amazing German ambush in the marsh.
Posted by Colin's Wargaming Stuff at 19:28