Here goes with first of the scenarios written by Andrew Rolph and recently published by Miniature Wargames with Battlegames under the banner of Fighting the Great Patriotic War one battle at a time.

This scenario is set at the beginning of Operation Barbarossa in June 1941 and is a Soviet counterattack against a German position with German reinforcements on the way. Standard stuff. 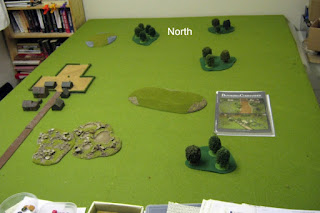 Layout
Here's the initial layout.
The Germans are defending in the west and the Soviets are attacking from the east.

The woods, hills, village and hedges are treated as normal.
The rough ground in the foreground I treated as Low Area terrain for visibilty, Impassable to vehicles and guns and Soft Cover.

Objectives
Soviets - to breakthrough and exit the table along the west edge which is held by the Germans. They must also contest the village, which means occupying at least one sector, so they can't just ignore everything and charge off.
Germans - to destroy any enemy that attack your sector.

OOBs
... are long and in the downloads mentioned in my previous Post - Blitzkrieg Commander II revival.
You will get an idea from the piccies.

Deployment
The Soviets start off-table along the east edge, nominating a start point for each formation. 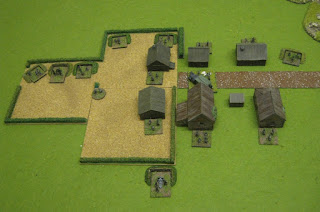 The Germans deploy their starting forces up to about half way from the west edge (I used a 6'x4' table instead of 6'x5' as stated in the scenario).

I put the infantry defending the village and farming area. The StuGs are off to the right behind the rough ground. 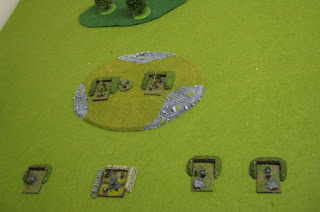 The FlaK battalion are around the north hill behind the wood.


Pre-planned Artillery
Playing this solo I hit the problem of having pre-planned artillery for the Soviets while knowing where the Germans were deployed. I came up with a solution which I thought worked quite well.

There are 6 off-table guns (3 x 152mm, 3 x 122mm) with 5 turns of pre-planned artillery. I chose a spot for each of the three 152mm guns around the village as that was a major objective and very likely to be occupied by German infantry. There were several other places in the German deployment zone that could well hold German positions that could be targeted by the 122mm guns. I chose 6 such positions on hills, woods and the rough ground. I then weighted the 3 most likely with +1 and rolled a d6 for each. The 3 highest scorers got allocated as a strike point.
The scenario states that having planned your artillery, you roll a d6 for each gun and on a one it takes no part in the game. I lost 2 strike points as a result.
I ended up with two x 152mm strike points in the village, one 122mm hitting the north hill occupied by the FlaK battalion and one 122mm blasting away at the rough ground. Not bad, I thought.

Due to the randomising of Soviet arrivals only one infantry battalion moved off initially. The StuG formation saw an opportunity to intercept them and started to move round the rough ground to meet them. 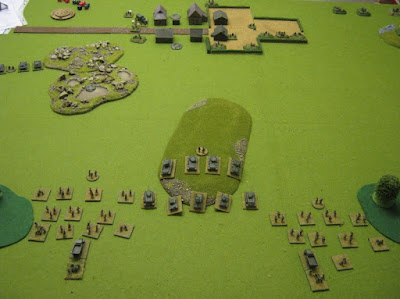 This gives the StuGs a fright, but they are committed now. It's fight or flee.
They fight.


In the village, artillery has started landing on four sectors. The German CO orders the infantry to abandon the buildings and take cover nearby.

The two 88s on the hill don't have the luxury of moving and have to endure the barrage.

The Russian tanks cannot ignore the StuGs killing their supporting infantry and turn to face them.

The StuGs are taking a hammering, but suddenly - WHAM - one of the Russian tanks on the central hill explodes.

This is followed by two more. The 88s around the north hill have opened up.

Further north, one Soviet infantry battalion get into the woods in front of the 88s on the hill. 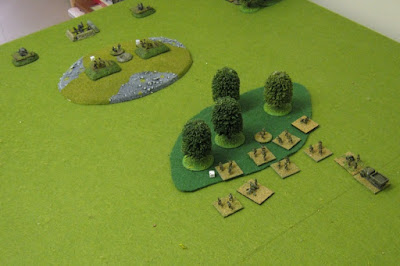 The Russian tanks on the north flank have only just got moving. They nearly didn't turn up.

The StuGs destroyed, Soviet attention turns back on the village, but keeping behind the hill away from the 88s. 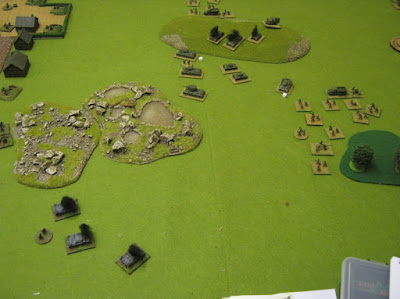 The German CO has realised that the artillery barrage has stopped and he needs to get his troops back into the village. Can he do it in time? 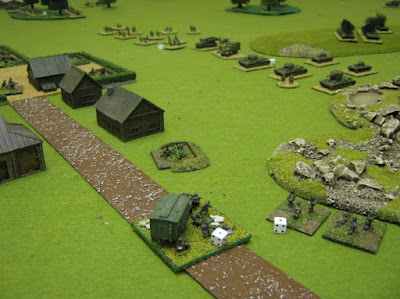 In the north, the infantry have made it through the woods just as the tank battalion moves past it, straight into the 88s. The 88s hit the tanks but opportunity fire from the Russian infantry finishes one of them off.

The 2nd 88 on the hill is put out of action and the infantry advance. There's still an 88 and some 20mm Flak units behind the hill. The Soviet tanks have failed their Command Roll to support the infantry. 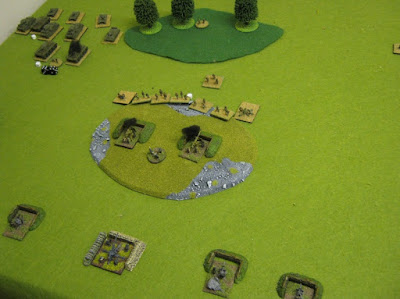 Honestly, this is how it happened - The first German reinforcements turned up in the corner after being delayed for two turns. A Recce battalion with armoured cars, guns and PzJagers.

With the Recce battalion holding them back and the FlaK battalion killing them, this is getting difficult for the Russians. 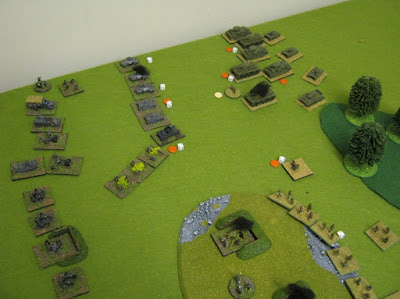 The German infantry have made it back into the village, but the Russians are coming. 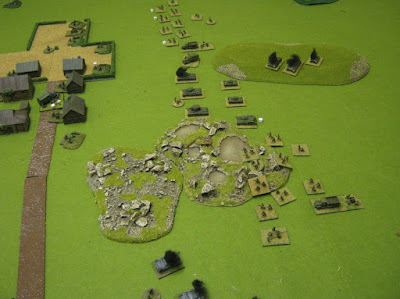 The tanks have to advance right up to the village before they can see and react to the German infantry. But when they do they hit them hard, killing two units on the outskirts of the village. Supporting Soviet infantry moving through the rough ground are ready to charge in to the village. On a double one the infantry get a foothold in the village. This is one part of the victory conditions for the Russians. They also need to exit the table from the western edge with as many formations as possible.

The FlaK battalion let down the Recce battalion and the light armour of the armoured cars and PzJagers is no match for the Russian tanks. 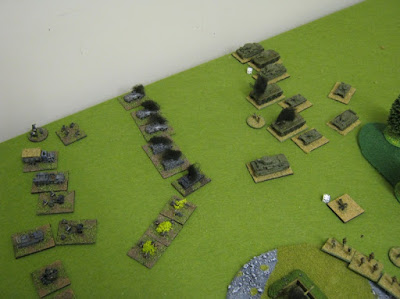 Soviet infantry crest the hill and come under opportunity fire but inflict more casualties on the Recce battalion causing them to quit the field. 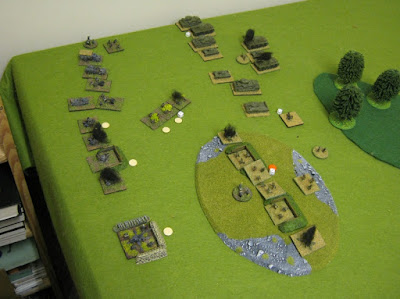 Just as the Recce battalion flees, more Germans turn up. A heavily armed formation of engineers in half-tracks supported by various artillery units including a Wurfrahmen and a FOO for off-table artillery.
The tank battalion bypasses them off the table leaving the infantry to their fate... 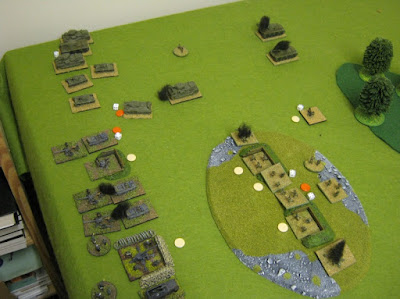 ... which comes quickly. The new arrivals move south to try to cut off the Russians at the far end of the village. 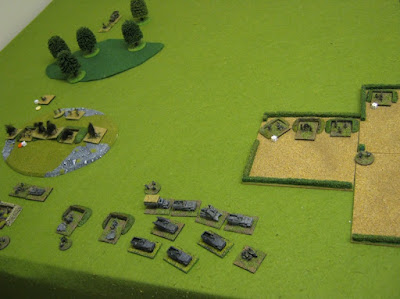 At the village, the Soviet infantry battalion in the centre has been destroyed. 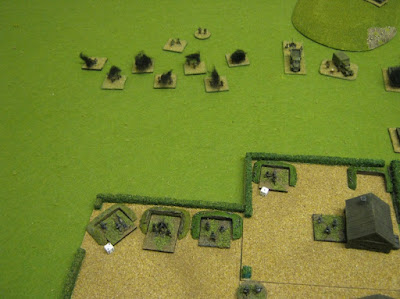 In the south the Russians have emptied another village sector and are closing in. 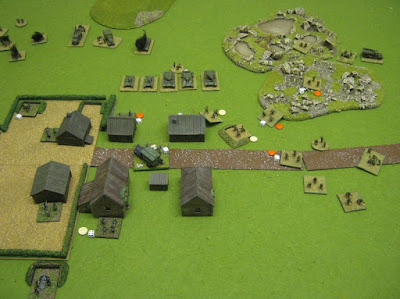 The Germans' puny anti-tank rifles are having no effect on the Russian tanks and they turn all their attention on the Russian infantry occupying village sectors. 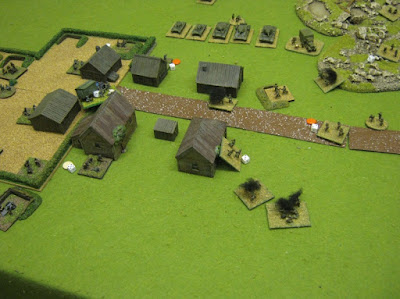 They just managed to finish off the Russian infantry as the tanks head for the table edge.
With the last of their infantry in rout, the Russian tanks can not exit the table and also hold any village sectors. One more lost tank and they rout anyway. 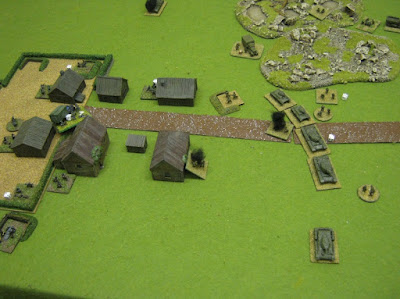 Winners and Losers
I don't often count Victory Points because enjoying the game, and coming to a mutual agreement, is more important to me than who won mathematically, but here goes.
According to the scenario, the Germans get 1 Victory Point for each Russian formation destroyed.
The Russians get 3VPs for each tank battalion, and 2VPs for each infantry battalion, that leave the table by the western edge.
So that would be 3VPs to the Germans and 6VPs to the Russians.
But the Russians also have to hold at least one village sector, which they don't. As the Russians don't hold any village sectors they can't win.

Thoughts
Well, I enjoyed that game. It was quite a big game, and it's been a while since I played BKC II, so it took a while but it was worth it. No doubt I made some mistakes and missed some opportunities, but it felt about right.
The random arrival times of the Soviet forces are an intended effect of the scenario and worked quite well. Under the scenario, it's possible that some of the Soviet forces don't turn up. They would have struggled in this game if that had happened.
As this game turned out so well I'll be moving on to the second scenario in the series very soon.

Posted by Colin's Wargaming Stuff at 15:21