Scenario 2 of the series, Fighting the Great Patriotic War one battle at a time, written by Andrew Rolph and recently published by Miniature Wargames with Battlegames.

Most figures and models are Pendraken.

It’s still early in Operation Barbarossa in July 1941 and the Germans have come up against The Stalin Line running along the original Russian border before the Russians moved into Poland in 1939. The original defences have been neglected and stripped of armaments and now hasty defences have been set up. 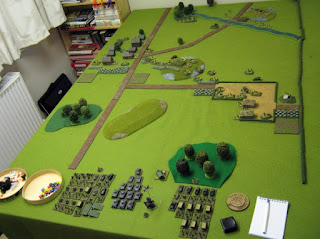 Layout
The initial layout.
The long hedge on the right is the edge of the world, as is the sharp cut off of terrain and clutter in the foreground.

The Germans are attacking from the west (this end) and the Soviets are defending in the east (far end).

The river is impassable to vehicles and infantry treat it as an obstacle on each bank and difficult terrain wading through it. The bridge is broken.

Objectives
Germans – exit beyond the river from the far end and to the right of the single tree in the centre of that edge.
Soviets - to stop the German advance. In the scenario, Russian formations (that have been at least under fire) can exit by the same route and gain Victory Points. I forgot (or ignored) that. No retreat!

OOBs
Details are in the downloads mentioned in my previous Post - Blitzkrieg Commander II revival.

Note: the three front line Soviet Rifle battalions are restricted in movement by having the HQ fixed in position. They can only be moved if they come under fire and receive a change of order. I decided the HQ needed to receive an order from the CO, then roll a d6 needing a 5 or 6. If successful they can move normally next turn. To even things up a bit I gave each fixed HQ a Command Post at their fixed position.
One Rifle btn in the rear is allowed normal movement, as is the group of T-26s.

Field Defences
The total length Field Defences allowed are in the scenario. If you string them out in line you can have some sort of defence along the whole Soviet front line, which would be just silly.
For positioning the wire, dragon’s teeth and minefields I used a similar randomising method as I did for the pre-planned artillery in Scenario 1. I assumed the order from the Soviet side would be wire, dragon’s teeth, minefields. I divided the Soviet forward deployment line into 4” sections (because that is how my defences are based) then weighted the areas in front of the village and farm with +1 because I reckoned those defences would be least neglected. Then I rolled for wire, dragon’s teeth and minefields separately in each section, the highest scorers for each got allocated the defences, up to the allowed total length. So some sections have one, two or all three types of Field Defence, and some have none.

The Germans start off table in the west.
Where to attack was the first problem for the Germans. Looking at the Soviet Field Defences, I got the song “Straight down the middle” in my head. As far as possible I was going to ignore the village by keeping to the right (south) of the nearest hill. The 1/52nd Motorised btn was to move through the wood and engage the Russians in the farm. The Panzers were to head straight for the gap in the Field Defences to the right of the central hill with the 23rd M/C btn in support, mainly by indirect fire. Once the Panzers had broken through the front line defences, the M/C btn would be ready to follow them through, build a bridge and exit the table. The Stuka missions would be used against any armour encountered. Sounds like a plan. 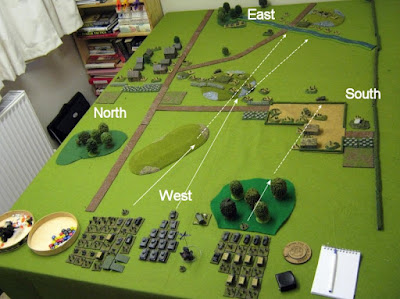 The Game (at last)

The Germans advance according to their plan. The panzers heading for the centre with the 1/52nd Motorised btn supporting from the woods. 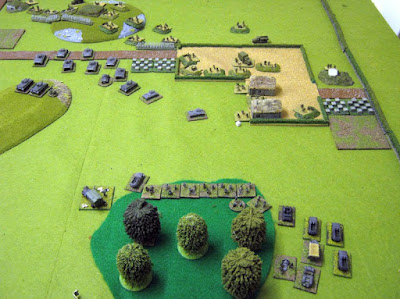 Shooting breaks out between the infantry in the wood and the farm ... 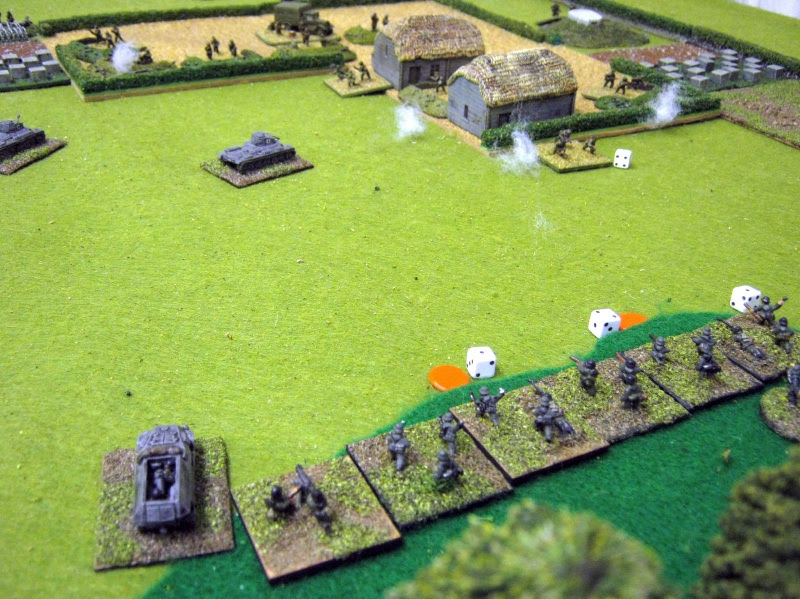 ... and the panzers destroy one of the infantry stands in the centre with shell and mg fire. The Russian infantry have no Infantry Anti-Tank Weapons and just one anti-tank gun. They have to resist the tanks and hope artillery support will give them some relief. 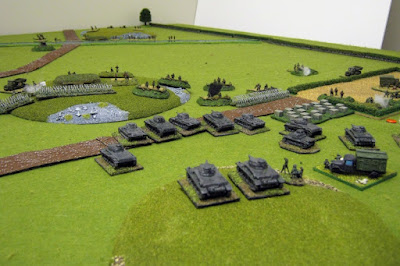 The panzers continue shooting but their commander gets bored and orders them to advance a full move towards the nearest visible enemy unit. Some might consider this a Blunder. The CO has moved up to the panzer commander for a few words. 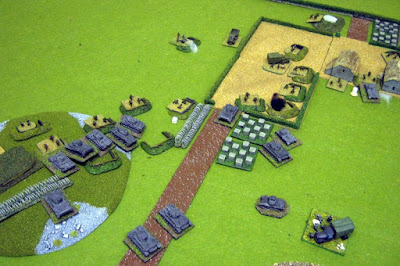 The Russian infantry are well able to deal with tanks at close quarters and the tanks are beaten back with some destroyed. Encouraged by their success, the Russian infantry then use their Initiative to charge the rattled tankers. 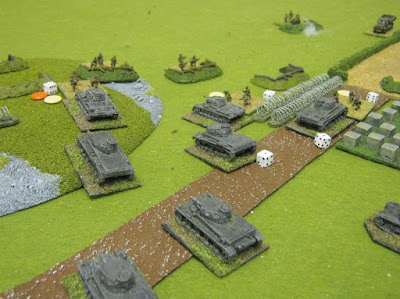 After all the Close Assaults, four German tanks and two Soviet infantry units had been destroyed. Some of the German tanks that survived were also damaged.

An overview at this stage shows the two German infantry formations are in position and giving support to the panzers who are still battering away at the Soviet centre. 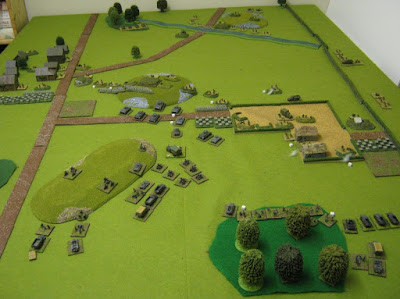 The 1/52nd Motorised battalion broke in to the farm. The Russian HQ at the farm had to roll for a morale check and failed due to losses taken so the rest routed. 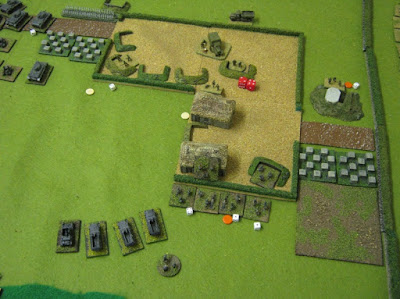 In the centre the panzers resorted to blasting the Russian infantry out of their trenches and created a gap in the Soviet defences. 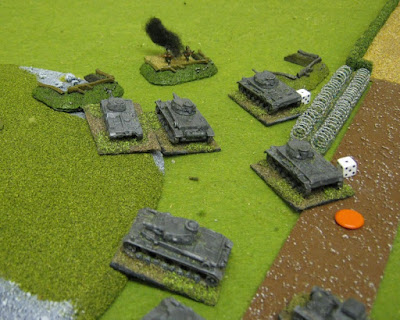 The panzers raced through the gap. 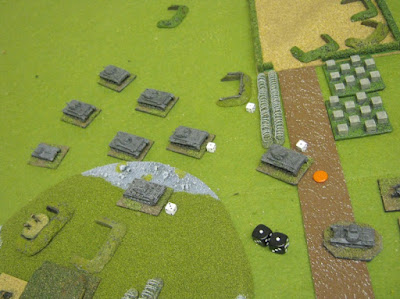 As the 23rd M/C Battalion followed with some fire coming in on their left flank, the panzers were coming under fire from the Soviet 2nd line. 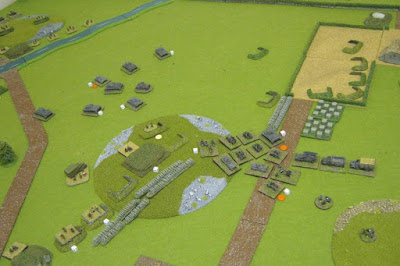 The Russian HQ in the centre passed their morale check first time but failed at the start of the next turn and the Russian infantry in the centre routed. Most of the Russian infantry in the village could only watch, but their infantry gun had been steadily firing away taking its toll on the 23rd M/C Battalion.
The Russian CO has just successfully given the HQ in the village a change of order so he can move to attack the flank of the German advance if he needs to, but then he wouldn't benefit from the Command Post.
A KV-2 dug in by the river opens fire at the panzers as they cross the open ground. The M/C infantry start to follow the panzers, but once they get behind the cover of the central hill they decide not to go any further. 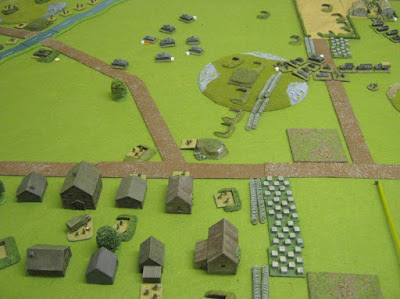 The panzers turn to face the KV-2 receive Opportunity Fire from the KV-2 and some T-26s in a wood. Two more panzers are destroyed and they have to start checking their morale. 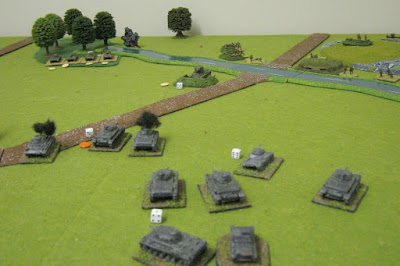 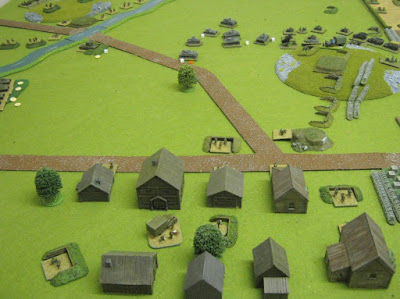 … but come under fire from Soviet heavy artillery and a machine gun behind the river. 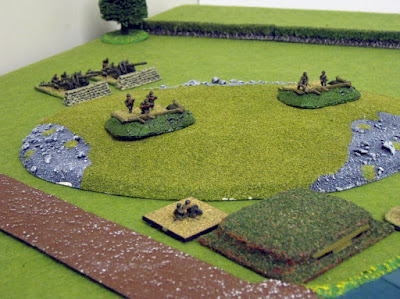 A PzII and a M/C combo are destroyed. 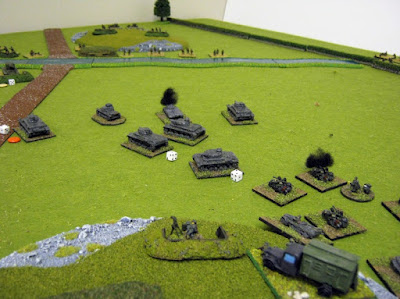 The German FAC calls in an airstrike against the T-26s but misses so badly it hits the KV-2. On the good side it achieves 3 unsaved hits against the KV-2, but fails to Suppress it. 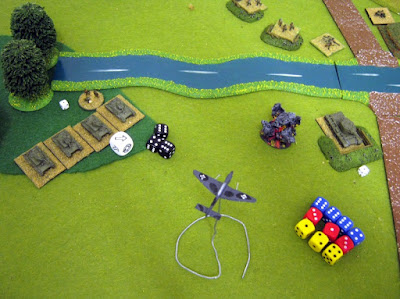 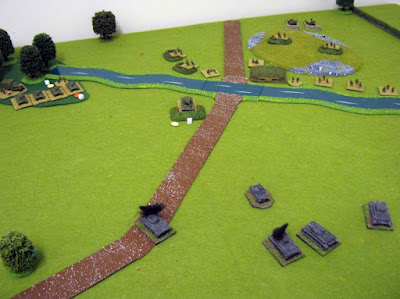 Another airstrike against the T-26s was more successful and destroyed two. The rest failed a morale check and routed. 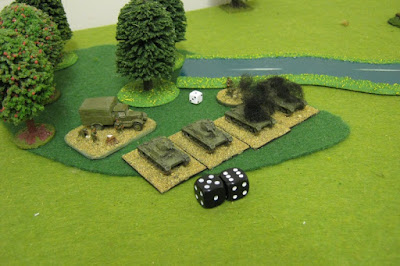 Only two panzers were remaining and they managed to finish off the KV-2 before failing their next morale throw and also quit the field. 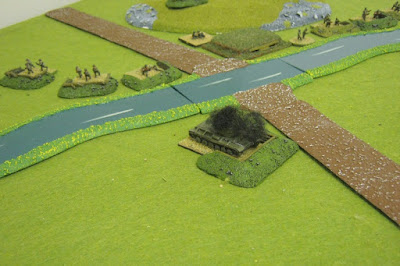 With no armour (except a few German half-tracks) remaining on either side, this left two depleted German infantry battalions facing a full Russian battalion dug in behind the river another threatening their flank from the village. 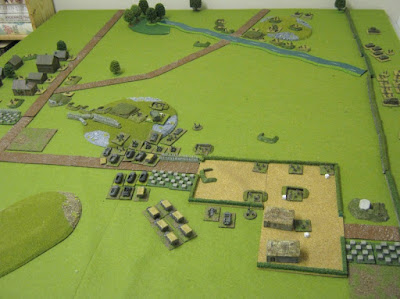 TWO ALTERNATIVE ENDINGS
I was checking for morale at formation level and I wasn’t fully decided how to treat Army Morale.

ENDING 1
If I treated all routing Russian units as casualties, then an Army Morale check was due, which they failed, so they lost.
That would also be the case if counting the number of formations routed against those remaining (3 lost, 2 remaining). 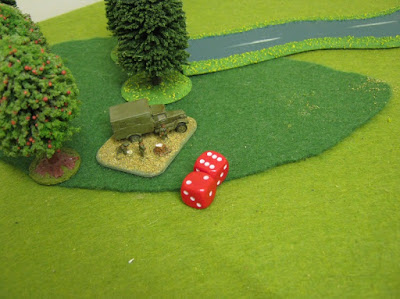 ENDING 2
If I only counted units actually destroyed as casualties, the Russians did not need to check Army Morale and the battle continues.
That would also be the case if the Soviet battalions that were still in good shape were allowed to carry on and only worry about their own morale.
Then it’s a different story.

The German M/C battalion had little option other than to charge against the Russians at the river. They hoped the Motorised infantry at the farm would support them, but they decided they were quite happy where they were and didn't move. As expected, it didn’t last long and the Germans lost. 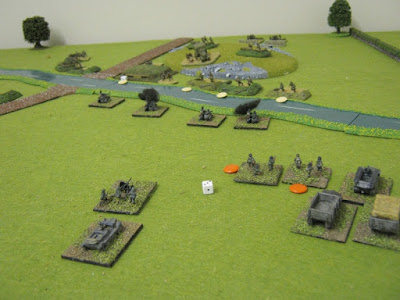 Winners and Losers
So who won? Who cares? Not me, I had a great time. Choose your preferred ending.

Posted by Colin's Wargaming Stuff at 10:37